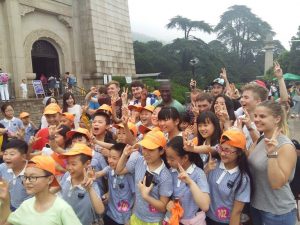 “We were with the NUAA guides exploring the Sun Yat-sen Mausoleum in Nanjing. There was also a class of young students there on a school tour. Most of them were taking pictures of our group till one of them came over to ask if it was alright to take a picture with us. We accepted. At this point other students were asking to take pictures until the whole class decided to get a group photo with us taken by their teachers. This is a photo we took with a class of young students who were at the Sun Yat-sen Mausoleum on a school trip. “

“I had a brilliant time in China and was warmly welcomed by all the staff and students.”

“Relaxing in a Nanjing tea house trying some green tea, which was served after a 15 minute tea ritual.”

“We visited one of the Chinese students in his hometown, Chengdu. He took us out for a local delicacy called hot pot. It was the spiciest meal I have ever had and I even tried some cow’s stomach.”

“After spending four weeks at the university, I was able to travel around China. I visited the Longji Rice Terraces in Guangxi province. It may have taken a 25hr sleeper train and then a 3hr bus which crashed on the way to get there, but that was all part of the experience.”