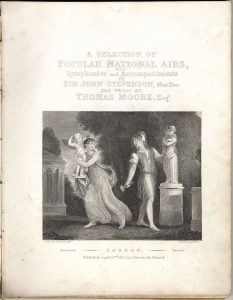 During October and November I spent time examining 32 editions of Moore’s National Airs extant in Special Collections at the McClay Library, Queen’s University Belfast.  Original titles for Moore’s National Airs include National Melodies and Airs of all Countries.  Examination of Moore’s letters show that his publisher, James Power, appears to have proposed the former title while the poet-songwriter’s own preference was for the latter title.  I believe that what eventually became the final title, i.e. National Airs, encompasses the best of what was proposed while also capturing the essence of this particular song series. 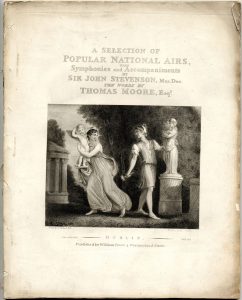 The images in this blog show the title pages from two different editions of the First Number of National Airs.  The edition shown in the first image was published by James Power, 34 Strand, London and bears the date of publication; April 23rd 1818.  The edition shown in the second image was published by James’ brother William who was based at 4 Westmorland Street, Dublin.  Each title page provides us with information about the various individuals involved in creating these early editions; the composer of the piano accompaniments was Sir John Stevenson; the words, of course, were by Thomas Moore; both title pages include an illustration drawn by T. [Thomas] Stothard.  Do you notice any differences between the two title pages?  They may be somewhat difficult to identify in the photographs.  The price shown on the James Power edition (on left) is 12 shillings, the price shown on the William Power edition is 13 shillings.  Despite including an illustration by the same artist each publisher engaged a different engraver; J. Mitan is the engraver attributed on James Power’s edition and Martyn of Dublin is the engraver attributed on William Power’s edition.  If you enjoyed this post share it on Twitter and Facebook.  Thank you!