Picking up on the previous posting by Conor Caldwell, today we will consider further the dissemination of the highly popular tune, “Nora Creina.” Beethoven and Moore appear to have noticed this tune at around the same time, for the former is believed to have acquired it by 1810 (to honour a commission from the Edinburgh-based published George Thomson),  while the Moore-Stevenson arrangement of it appeared in  Irish Melodies number four of 1811. ‘Nora Creina’ subsequently  inspired various transcriptions for piano, including Augustus Meves (London, 1818), William Vincent Wallace (London, 1856), and R.F. Harvey (London, 1872). Its lilting 6/8 metre also made is a popular choice for dance compilations, including Admired cottillions for balls and private parties (Philadelphia, c. 1835), as well as Pop goes the weasel! (London, c. 1850).

With Moore’s lyrics, “Lesbia hath a beaming eye,” the tune was circulated in a small 1814 compilation issued by an anonymous Waterford printer ( held in the National Library of Wales); in 1828 an enterprising publisher in Falkirk issued “Lesbia” as part of Three excellent new songs  (held by University of Glasgow Libraries).  Continued interest in Moore during the Victorian era saw all of Moore’s Irish Melodies  subsequently edited by J.W. Glover ( Dublin: Duffy, 1859), as well as by official copyright holder Francis Robinson (Dublin: Robinson and Russell, [c. 1865]). “Lesbia” attracted at least one additional arrangement, by the London-based composer Alexander S. Cooper (1869). While Lalla Rookh (1817) was perhaps the first of Moore’s works to be issued with numerous illustrations, arguably the most famous of such presentations is the mid-century Longmans edition of the Irish Melodies, with one or more illustrations  for each and every Melody by Daniel Maclise. 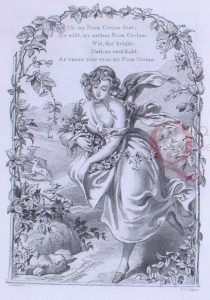 The bibliophiles amongst our readers may enjoy tracking the different variants to Moore’s poem, most of which were promoted by the poet himself–perhaps with some unintentional variants introduced by ‘the printer’s devils’ variously associated with music publisher James Power in London. The very opening of the song, initially presented as “Lesbia hath a beaming eye” in both poem and lyrics, first became “Lesbia has a beaming eye” as early as the letterpress poem of the 1813 J. Power edition. While Moore favoured has exclusively from 1815 in his editions with James Power, by the time the London-based Longmans firm issued his Poetical Works (1840-41), he had reverted to hath. We find both these variants (and others with different dates of origin) live and flourishing in posthumous editions of the Victorian era. And also illustrations celebrating the sophisticated charms of Lesbia as compared with the artless appeal of young Nora Creina.

Do you know of editions or arrangements of ‘Nora Creina’ not mentioned here? Do you think they were stimulated by Moore, or another variant of the tune? Tell us about it on the blog!

Perhaps the most noteworthy example of Thomas Moore’s impact upon the Irish instrumental music repertoire is seen through the song ‘Lesbia Hath a Beaming Eye’, which is set to the single jig tune ‘Nora Chríonna’ (single jigs are marked by 12/8 time signature and the predominance of crotchet-quaver movement). This simple tune is one of the most collected in the entire Irish repertoire. Thompson collected a three-part version as early as 1755 under the name ‘Ranger’s Frolick’, from which we can see the development of the A part familiar to us today.

A later version appears as ‘Norickystie’ in James Aird’s A Selection of Scotch, English, Irish and Foreign Airs (1790-97). It was almost certainly Moore’s song to the air that standardised the melody in 1810, although Capt. O’Farrell’s four-part version (with the C and D parts set as repeats of the A and B parts an higher octave) must also have been prominent. Later versions were also published by celebrated Irish collectors Francis O’Neill and Breandán Breathnach. The following transcription of the tune comes from the playing of the Donegal fiddler John Doherty (1900-1980) and is particularly noteworthy for his use of continuous tonic pedal in imitation of the highland pipes, achieved through the use of open tuning on the fiddle.

A key similarity between Moore’s setting and the contemporary dance tune is the retention of the flattened seventh in bars 11 and 8, respectively, of the Moore and Doherty transcriptions below. This feature is reminiscent of the Gaelic scale system which Moore’s rival, Edward Bunting overwrote in his publications.

Of course the Irish instrumental tradition is defined by more than just renditions of dance tunes. Indeed, instrumental airs form one of the core strands of the modern tradition and a fine example of this is seen in the Dublin fiddler Tommy Potts’s (1912-1988) iconic setting of ‘Believe me if all those Endearing Young Charms’.

These are just two examples of Moore’s wider influence on the musical discourse of subsequent generations in Ireland and beyond. The teaching of Moore’s songs in Irish national schools after the formation of the Irish Free State in 1922 undoubtedly brought them into the consciousness of young musicians. His influence on the oral tradition should be acknowledged, not just in his own time, but in the decades which have followed.