In relation to project ERIN, the British Library possesses one of the largest, and most significant, collections of sources for Moore’s work (http://explore.bl.uk/). The range of sources includes complete runs of the Irish Melodies Numbers 1-10; complete runs of the National Airs Numbers 1-6 and a large selection of songs, operas and ballets based on Lalla Rookh. Contained in the BL’s collection are five different editions of The Meeting of the Waters.  These include two publications edited by Professor Clare (one dates from 1859 and the other was published in 1868 by Holdernesse), an edition published by Williams in 1859/60, an arrangement for two voices by Frank Romer published by Leader & Cocks in 1860 and an 1872 edition published by George Bell. All of the aforementioned editions were published in London.

The collection at the BL also includes earlier editions of the song published by James Power (London), William Power (Dublin) and Addison & Hodson (London); the dates of publication for these editions range from 1820 to 1845. James Power editions of the song are present in the collections at the National Library, Dublin and Special Collections at McClay Library QUB. Also at the National Library is a William Power edition of the song and an arrangement for two voices by W. H. Montgomery which was published by C. Sherard at the Musical Bouquet Office in London circa 1855.

The Meeting of the Waters

The existence of these editions and arrangements illustrates Moore’s influence on nineteenth-century composers, arrangers and publishers over the course of a 64 year period (1808-1872) while also highlighting the song’s popularity. The Meeting of the Waters is one of the better known Irish Melodies and appeared in the First Number published in April 1808. The following quote is taken from a footnote included by Moore in an early Power edition.

“The Meeting of the Waters” forms a part of that beautiful scenery which lies between Rathdrum and Arklow, in the county of Wicklow, and these lines were suggested by a visit to this romantic spot, in the summer of the year, 1807.”

During the month of July (2016) I spent two weeks researching at the British Library (BL); the St Pancras branch which is located at 96 Euston Road, London. My experience of researching here was extremely positive – it’s a state of the art facility and the library staff are professional, helpful and friendly. Since my reader’s pass expired in 2013 I first needed to visit Reader Registration (on the ground floor) to renew my pass. This is a straightforward process, however expect it to be busy. On arriving at the desk you are asked for the required documentation (see website http://www.bl.uk/). Provided all is in order, you are then directed to one of the PCs to fill in an online form and receive your number in the queue. Once you go through the registration/renewal process the assistant will issue your new card. Coats and bags are not allowed in the Reading Rooms; lockers, which require a £1 coin, are provided on the lower ground floor. 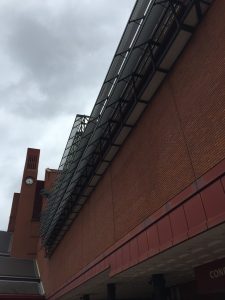 I was researching in the Rare Books and Music Reading Room located on the first floor. To order items you must register online via the ‘Explore the British Library’ page. Once you have your reader’s pass you can order in advance of your visit online. You can track the progress of your order by clicking on ‘My Reader Requests ‘and orders take up to 70 minutes to arrive to the reading room. You can order up to 10 items each day, however you will only be issued 6 items at a time. Up to 6 items can also be held over until the next day.  The Rare Books and Music Reading Room is well equipped; despite the large number of desks available to readers it is best to get there early to ensure your seat. The reading room times are listed on the library’s website (http://www.bl.uk/aboutus/quickinfo/loc/stp/opening/index.html). Each desk has a reading lamp, wi-fi is available onsite and there are three cafés, a restaurant and coffee dock onsite. The shop is also worth a visit whether looking for an interesting book or a souvenir!