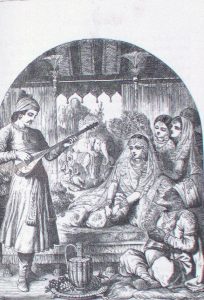 For Moore, socializing usually had an element of networking to it. His journal records various social encounters with Lord Burghersh (John Fane, 11th Earlof Westmorland), including an instance of dining with the latter in Florence on 23 October 1819. Burghersh was a keen composer, and his settings of many of Moore’s lyrics were published by Moore’s regular music publisher James Power. This working relationship surely strengthened Moore’s ties to an elite class whose support and regard were of considerable practical importance to him. Indeed, at this particular dinner Moore learned that Burghersh’s setting of the song ‘Bendemeer’s Stream’ from Lallla Rookh had inspired a translation of the song into Italian. Moore’s profile in Italy was likely enhanced by his association with Burghersh, as the latter held various diplomatic posts there between 1814 and 1831 and so would have been a man with contacts and influence. 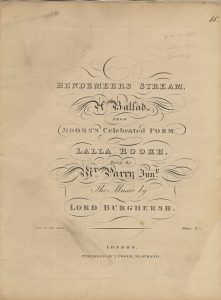 Moore sometimes picked up gratifying news about how his works were faring while dining with his well-connected acquaintances. During his dinner at the Palais Royal (27 Feb. 1821) he learned a “rather flattering piece of news”— a month previous, the Court of Berlin had “represented in character” the story of Lalla Rookh, with Britain’s Duke of Cumberland assuming a small role as the Mughal emperor Aurangzeb (the music, by Gasparo Spontini, is not mentioned in Moore’s account). The event was reported by Chateaubriand “as the most splendid & tasteful thing he had ever seen”.  A “Lady of Honour” at the Paris dinner even offered to translate the German programme for Moore’s benefit. Much later, in June 1847, Moore mentioned another production,  “founded upon ‘Lalla Rookh,’ [which] was brought out this year at the Queen’s Theatre; and the example was followed promptly by many of the minor theatres … “. Moore goes on to report performances of various settings of his songs from Lalla Rookh that had recently taken place at the Welsh singer-pianist John Parry’s May 1847 concert in the prestigious venue of London’s Hanover Square.

Moore’s journal and correspondence also record countless occasions where he networked by performing — particularly his Irish Melodies — at the London clubs (for which publisher James Power paid his membership fees) and private parties of the influential bon ton. This kind of socialising was a very profitable form of advertisement for Moore’s work, as he often acknowledged in his letters to Power.  Given his sociable nature, we can assume he did not find ‘singing for his supper’ a difficult chore.