After graduating from Trinity College Dublin, Moore was a promising young man in need of employment. His amiability secured him the interest of Lord Moira, and it was through this connection that he was offered an administrative post in Bermuda. And so the young poet set sail from Portsmouth  to Norfolk, Virginia in September 1803, writing home whenever he could  about his adventures. Unsurprisingly, he responded to the brave new world of America as a well-educated, cultured, European. After a “boisterous crossing”, the young Irishman was touched by the “homely … and genuine civility” of Colonel Hamilton, the British consul. Moore was genuinely reassured by the presence of a harpsichord at the Hamiltons’, taking this to be a sign of “civilisation”. He relished opportunities for music-making and dancing, describing his role once he reached Bermuda as acting as the “whole orchestra” for music parties and attending balls once or twice a week. His sensibility as a cultured young man led him to pity the young women of St George’s, for although they were generally good dancers, they were so evidently untutored, being “thrown together in this secluded nook of the world, where they learn all the corruptions of human nature, without any one of its consolations or ornaments.” And Moore so valued the rare literary culture of Philadelphia that he was actively disappointed to have to leave there.

The young writer had a very profound response to the natural beauty he encountered, describing the Passaick Falls as “sweetly romantic”, the Coho Falls as “impressive”, and Niagara Falls as a “mighty flow of waters descending with calm magnificence”. This last experience was a spiritual one, as Moore “felt as if approaching the very residence of the Deity”. He was also moved by the Mohawk river, whose “immense banks” possessed a “holy magnificence”. Moore conveyed a profound respect for nature in his poetry of the time, including his “Lines Written on a Storm at Sea”:

‘Tis as a solmen voice from heaven,

And the soul, listening to the sounds,

While describing himself as “amused … by the novelty of [the] appearance” of the Oneida Indians, Moore was genuinely impressed with their chief, Seenando, describing him as “courteous … gentle and intelligent”. Moore’s Whig sensibilities are evident in his indignant response to the plight of the Oneida with regards to their land, which the American government had been “continually deceiving them” into surrendering. Moore’s deep appreciation of human fellowship is seen in his first success as a lyricist, the “Canadian Boat Song”– stimulated by his first experience of riding a canoe:

Faintly as tolls the evening chime, 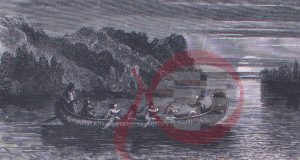 Our voices keep tune, and our oars keep time;

Soon as the woods on shore look dim,

The rapids are near, and the daylight’s past.

Who is your favorite “nature poet”? Do you have a verse you would like to share on the blog? 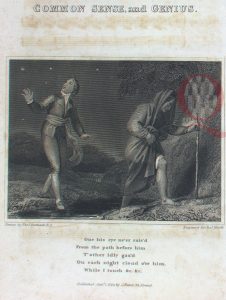