The piano was invented by Italian Bartolomeo Cristofori in 1709. It wasn’t until the 1740s that it became widely used in Germany, with notable use in Britain dating from the 1760s – about a decade before Moore’s birth. England quickly became a leading centre of piano manufacture with John Broadwood and pianist-composer Muzio Clementi being the main producers (Temperley, page 400). Yet the piano was considered a new experimental instrument and could only be afforded by the upper classes. This created a clear distinction in the music played by professional and that of amateur musicians. The concert scene was thriving, and the piano was used primarily as part of an orchestra or in an ensemble of wind or string instruments, but rarely as a solo instrument. If the popularity of the piano was to increase, there needed to be a domestic market to introduce solo piano into the home.

Even in 1779, the year Moore was born, pianos were still exclusively for elite, professional musicians, and in Western Europe the harpsichord was still at that time more popular. The divide between professional and amateur musicianship gradually broke down, and more rapidly with the sale of amateur pianos and sonatas written for them.

Domestic music provided a need for printing and publishing scores, therefore making printed music cheaper, more plentiful and more accessible. The sale of piano music grew in the years following 1790, and as the quantity of music being produced grew, the quality grew poorer (Loesser, page 251). Few people were skilled enough to play high quality piano music, and simpler solo repertoire was commissioned to encourage piano playing amongst non-professionals. Composers began to recognise this need for more accessible music,  distinguishing “grand sonatas” written for  serious musicians from “sonatas” written for amateurs (Temperley, page 403). The latter preferred sonatas featuring popular tunes (Temperley, page 402). Composers turned to writing “in favour of the unskilled and uncultured” simply for the commercial value of the works (Loesser, page 251), as there was a high demand – especially in London. Austrian pianist and composer Josef Wölfl, whilst working in London, wrote to the publisher of Härtel magazine in Leipzig:

“Since I have been here, my works have had astonishing sales; but along with all this I must write in a very easy and sometimes a very vulgar style. So much for your information, in case it should occur to one of your critics to make fun of me on account of any of the things that have appeared here. You won’t believe how backward music still is here, and how one has to hold oneself back in order to bring forth such shallow compositions, which do terrific business here.” (Loesser, page 251)

The piano manufacturing business also benefitted from the growing trend of amateur piano playing, as pianos became readily sought after by the public (no longer merely the upper class) for domestic use.

Manufacturers promoted their pianos to amateur musicians and prospective players. In 1810, virtuoso pianist and composer Muzio Clementi (after a successful career as a touring performer), entered the piano manufacturing industry–travelling Europe selling his pianos to amateur musicians. Clementi had fellow pianist Jan Ladislav Dussek, one of the first concert pianists in London (Temperley, page 403), perform his  sonatas written for amateurs to mirror the repertory performed in the home and encourage the concept of virtuoso playing there. This was a considerable selling point, as in turn both his compositions and pianos promoted each other (Parakilas, page 26). To achieve this, Clementi created and published an introductory piano book entitled  Introduction to the Art of Playing on the Pianoforte (1801) (Parakilas, page 68). His aim was to generate a flourishing piano market so that more people, particularly in the domestic market, would want to learn to play the piano. He also knew that it would be easier to play the piano if one was already competent in harpsichord playing, and encouraged many harpsichord players to convert to playing the piano. Therefore, the previous popularity of the harpsichord can be said to have enabled the success of the piano in the domestic sector. 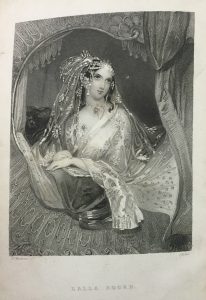 Similar to other libraries visited during the course of project ERIN the Staatsbibliothek zu Berlin (SBB) does not curate a dedicated Moore collection. However, the library is in possession of a unique selection of sources for musical re-workings of Lalla Rookh; these include nineteenth-century libretti and printed music. These sources, together with an account, costume designs and illustrations pertaining to the 1821 Berlin premiere of Spontini’s Lalla Rookh (1821), housed at the Lipperheidesche Kostümbibliothek, are valuable, offering much to Moore scholarship, and to the wider contextualisation of musical re-workings of Lalla Rookh. An overview of these sources, with a specific focus on Spontini’s Lalla Rookh (1821) and Nurmahal (1822) will be the subject of a conference paper that I will jointly present with Dr Sarah McCleave at the upcoming Lalla Rookh Bicentenary Symposium at Marsh’s Library, Dublin on 27 May 2017 (the full symposium announcement and programme is included at the end of this blog).

Gaspare [Luigi Pacifico] Spontini (1774-1852) was appointed to the position of Kapellmeister and Musical Director at Berlin State Opera in 1820 by the Prussian Monarch Karl Wilhelm III. Spontini’s two-act opera with ballet called Nurmahal is based on The Light of the Haram; the fourth and final tale from Moore’s Lalla Rookh. Nurmahal was first performed in Berlin on 27 May 1822; exactly five years after the first publication of Lalla Rookh was issued. A selection of extant concert programmes, housed at the SBB’s Manuscripts Reading Room (Handschriften-Lesessal, Potsdamer Straβe), documents 18 Berlin performances of the opera with ballet, which took place between the years 1822 and 1824. An excerpt from the concert programme for the first Berlin performance of
Nurmahal is transcribed below.

This research trip was kindly and generously funded by the Keats-Shelly Association of America, Carl H. Pforzheimer, Jr., Research Grant 2017.

Lalla Rookh Bicentenary Symposium –
Marsh’s Library, Dublin | 27 May 2017
27 May 2017 marks the two-hundredth anniversary of the publication of Thomas Moore’s epic oriental poem, Lalla Rookh. Dubbed “the cream of the copyrights” by its publisher, Thomas Longman, the work was an immediate commercial success, selling out six editions within six months of its initial publication. Longmans would eventually publish almost 100,000 copies of the work, including editions illustrated by prominent artists such as John Tenniel and Daniel Maclise. Lalla Rookh has enjoyed a rich cultural afterlife, with parts of the work set to music by Robert Schumann, Charles Villiers Stanford, and Anton Rubenstein, and numerous theatrical adaptations taking inspiration from Moore’s writing. A major reference point in the genre of Romantic Orientalism, the work has maintained a prominent position in scholarly accounts of the poetry of the Regency period, and its depictions of the dangers of political demagoguery and appeals for religious tolerance have a powerful and durable resonance. Lalla Rookh Bicentenary Symposium commemorates this anniversary by bringing together a range of national and international scholars to present current research on Moore and Lalla Rookh at Marsh’s Library, Dublin, where Moore completed research for his debut poetic collection, Odes of Anacreon.

Matthew Campbell (University of York): “Poetry and the ‘Cause of Tolerance’: Moore, Ferguson, Mangan”

This event is organised by Justin Tonra, with the assistance of Matthew Campbell, Brian Caraher, Sarah McCleave, and Sean Ryder (NUI Galway). The symposium is generously supported by the School of Humanities, National University of Ireland Galway, and by Marsh’s Library. 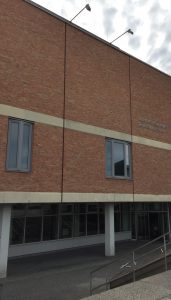 While researching in Berlin I also visited the Kunstbibliothek; Berlin’s Art Library, or, The Library of Art History. This library is located at number 6 Matthäikirchplatz, which is situated opposite the SBB’s Potsdamer branch. A number of art history libraries are housed within this building, including the Lipperheidesche Kostümbibliothek (Lipperheide Costume Library), where a selection of extant sources for the 1821 Berlin performance of Spontini’s Lalla Rookh are housed.

Gaining admission to the Kunstbibliothek/Lipperheidesche was very straightforward. You first need to register, and this can be completed onsite when you arrive. The registration office is located on the left next to the entrance. There is no registration fee but it is necessary to complete a form and to present your passport for identification purposes. You receive your library card immediately and this permits admission to all libraries within the Kunstbibliothek building. It is possible to order material through the online catalogue. Some items can be retrieved within 30 minutes, others will be retrieved the following day. I placed my order at about 4pm and the material was available to consult at 10am the following morning; this arrangement suited my research schedule.

As with all libraries visited to date, bags and coats are not allowed in the reading rooms. There are no locker facilities at this library. Similar to the SBB’s Unter den Linden and Potsdamer sites there is a cloakroom manned by a porter and this is where you store your belongings while in the reading room. You receive a token with a number for retrieving your belongings before leaving the library. There is also a café onsite.

This research trip was kindly and generously funded by the Keats-Shelly Association of America, Carl H. Pforzheimer, Jr., Research Grant 2017.