The Department of Music at Queen’s University Belfast is running a new module in spring 2017, called ‘A Night at the Opera’. For this module, final-year BMUS students collaborate on a concert for their assessed project. The core text for this year’s cohort of sixteen students is none other than Moore’s ‘Lalla Rookh’ (1817), which inspired numerous songs (for the domestic market), cantatas (for choral societies of the time), and operas (for opera houses in Dublin, Paris, London, Dresden, etc.) from the early romantic period through to the Edwardian era. With two sopranos, a mezzo, one tenor, one bass, two pianists, two violins, and one each playing flute, clarinet, and oboe, we will have to arrange some of the existing music to suit our forces. So some of the students are performing, some are arranging music, and others will be acting as presenters to provide a narrative as well as some visual display to support the selection of music.  One of the students, who has taken sound engineering modules in our BSc, will record the event to add to the ERIN project website. At our planning meeting last week we came  up with a provisional list of repertory, which will be refined further over the next couple of weeks as we begin rehearsals. 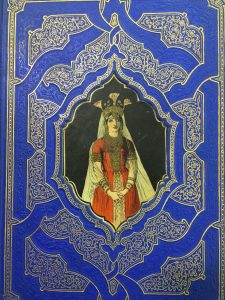 Part I. Lalla Rookh and Feramors

Part III. Paradise and the Peri

“True was the maiden” (recit and arietta), from John Barnett’s cantata, Paradise and the Peri (pub. London, 1870)

Part V. The Light of the Harem

NB: Future blog posts may be written by some of the students enrolled in ‘A Night at the Opera’.