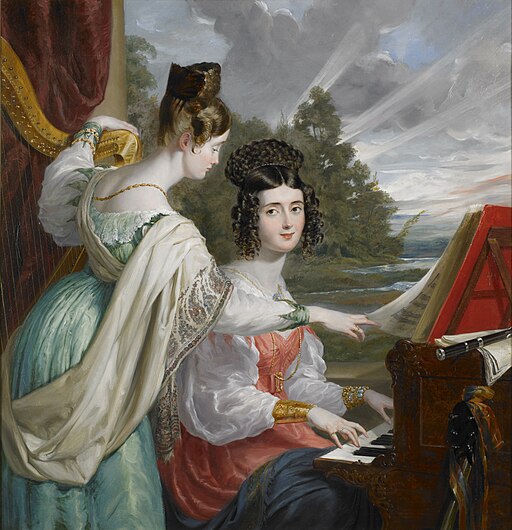 Portrait of the Hon. Charlotte Stuart and the Hon. Louisa Stuart, by George Hayter (1830). Wikimedia Commons.

Moore’s journal records his impressions of many an amateur or professional performance (he admired the soprano Angelica Catalani, but regarded the violin-virtuoso Niccolo Paganini as a rather empty talent). As he became an established author he moved in fairly elite circles: when invited to dine at the Palais Royal in Paris he declared the composer Ferdinando Paer and daughter’s performance of a flute sonata  “most charming”. Moore, too, was obliged to ‘sing for his supper’ (in his case, literally), and he recorded that his auditors “seemed to like it very much”.

Writing in his journal on 3 October 1818, Moore declared his continental leanings in musical taste, after having sung at sight some of British  composer Maurice Green’s anthems with the composer William Linley. While appreciating Greene as having written “fine, solemn, music … but as it is the foreign school of Haydn, Mozart, &c. gives me much more pleasure”.  On 28 October of the same year, Moore describes “play[ing] over some of Haydn’s Quartetts”. In further journal entries from the time he records various opportunities he took to copy out by hand some of Haydn’s music for his own use. This was a common mode of circulating music at the time. Indeed, while living in Paris, the very expense of acquiring some printed scores of Gioachino Rossini’s operas is recorded as a particular event — made possible only through the thrift of Moore’s young wife Bessy.

Apart from near daily presence of European art music in Moore’s domestic and social life, it played an important role in his career as a lyricist and song writer. This will be explored in the next blog.