Thomas Moore’s Lalla Rookh inspired dozens of songs by composers in Europe and America, dating from 1817 into the later Victorian period. James Power (d. 1836), who held the copyright over Thomas Moore’s music, seems to have encouraged or accepted material suitable for the domestic music market from a number of professional and amateur musicians, the most intriguing of who is one Lady Flint. Her Five Songs and a Duet, issued by Power on or around 1818, sets six song lyrics from within Moore’s ‘Oriental Romance’, including:

COPAC records but one other published composition by Lady Flint: ‘C’est mon ami : rendez-le moi’, a ‘Romance’ that begins:”Ah! s’il est dans notre village” and was written by Jean Pierre Claris de Florian (1755-94). Indeed, as a figure she would remain utterly shadowy to us if it were not for the  raconteur Captain Rees Howell Gronow (1794-1865), an officer in the Welsh Grenadiers and man about town whose Reminiscences and and Recollections [about]  the camp, clubs, court and society, 1810-1860 tells us

Among those of the fashionable world in London who patronised music … no one was more conspicuous than Lady Flint; whose charming concerts, given generally on Sunday at her house in Birdcage Walk, delighted all who had musical tastes and enjoyed the honour of an invitation. (London: John Nimmo, 1900, vol. 2, p. 267)

Gronow continues with an anecdote about the disruptive effect of noisy tea-drinkers on the musicians at one such event, establishing that the repertory performed included  violin concerto by Beethoven. Lady Flint counted among those who would perform at her concerts some of the leading London musicians of the day- including the acclaimed pianist-composers Jan Ladislav Dussek and Johann Baptiste Cramer, the “celebrated” violinist Giovanni Battista Viotti, and the double-bassist Domenico Dragonetti. From this one small anecdote we catch a glimpse of a woman of taste and discernment whose exposure to the best music and musicians of her day surely inspired her own imaginative responses to Moore’s lyrics.

Project ERIN is pleased to make available a recording from Lady Flint’s Five Songs, including a performance by BMUS students (graduating class of 2017) of the duet, “Farewell to thee Araby’s Daughter” 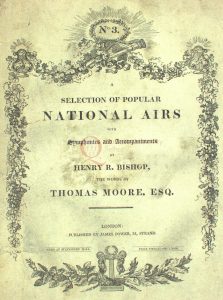 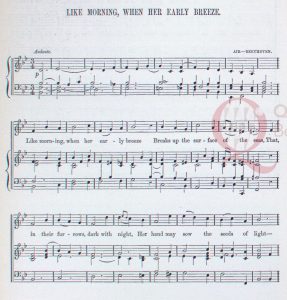 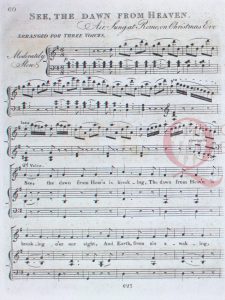