What does formal education mean for care experienced young people?

“Education is not preparation for life; education is life itself” (John Dewey)

In Northern Ireland, in 2013/2014, 73% of looked after children attained at least one GCSE/GNVQ at grades A* to G; compared to nearly 100% of the general school population.

When we talk about the education of children in care, we tend to focus on academic achievement. However, education and school is much more than that for care experienced young people. It has been argued that a good school experience is critical for Looked After children, as school can provide the stability and security they need, a safe place to shine and show what they can do. We have been holding a series of consultation events with a wide range of stakeholders (Fostering Network, Adoption UK, VOYPIC, Government Departments, HSC Trust senior managers, foster carers, adoptive parents, and care experienced young people) regarding what we should ask young people when we interview them in this phase of the study (when they will be aged 18-22). Education in this broad sense has come up as one of the top issues.

The role and attitudes of teachers

Teachers have a key role in facilitating and encouraging young people in care (or who have been in care) to achieve and have a good experience of school. When we interviewed children aged 9 to 14 (in foster/kinship care, adopted, subject to a residence order, and returned home) for the previous phase of this study, we found that teachers were crucial for children liking or disliking particular subjects, and even as people important in the children’s lives, in terms of support. For instance, while Anna (not her real name) considered her assistant teacher as a person important in her life, Bronagh (not her real name) didn’t like Geography because of her teacher:

Parents and carers also had different experiences of teachers, which had serious implications for the children. 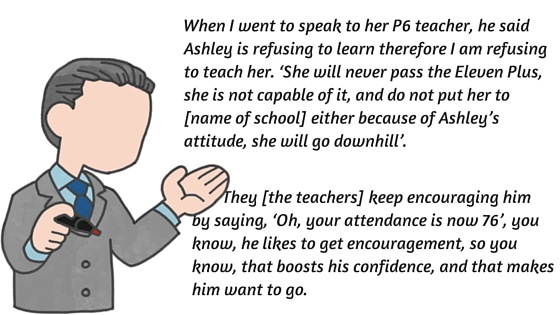 Researchers in a range of studies have found that teachers’ prejudices against LAC, often labelling them as ‘bad’ children, impact on children’s self-concept and on teachers’ expectations (meaning that they are not supported and encouraged to realise their potential). During our consultation, foster carers argued that teachers’ attitudes and expectations for the children could be a serious barrier to children’s academic achievement. They felt that teacher training into dealing with children with difficulties due to their disadvantaged and challenging backgrounds could make a difference on how teachers treat these young people, in turn affecting their outcomes and their school experiences. NICE guidelines (published in 2010) recommend that all teacher training programmes should have a core training module that looks at the needs of looked-after children and young people, and includes an understanding of the impact of loss, separation and trauma on child development, attachment and cognitive functioning.

Difficulties at school and educational barriers

Looked after children (LAC) often experience a range of educational difficulties, such as poor school attendance, school exclusion and suspension, poor attention span and other behavioural difficulties, as well as bullying. That is reflected in local statistics:

In the previous phase, some parents and carers highlighted the problems that their child was having at school, particularly behavioural problems, and being bullied (or/and bullying). Some children also talked about the effects that bullying had on them.

“From the end of September until January, he was out of school. Then he went back January to Easter, two days a week and from Easter to June three days a week. School really was a big stress and I mean, because he travels 20 miles to school out there and 20 miles home again.” (Danny’s adoptive mother)

During the consultation process, we have heard of many young people being excluded from school, skipping school, being out of school for long periods, and moving schools frequently. These can clearly be barriers to these young people’s educational achievement. In one of these events, young people also expressed that lack of confidence and self-esteem might be one of the reasons why they do not stay in education.

In the previous phase of the study, additional educational supports were more likely to be put in place for children in certain placement types rather than others, with most children who had been adopted by foster carers receiving them (67%), compared to 22% of children adopted by strangers, 36% of children returned to their birth parents, and 40% of children in foster care. Some parents/carers were dissatisfied with the level of current supports. For example, Gary (not his real name) had received extra help in the past, but then the carer was told that he could ‘cope alright on his own’. She believed he needed extra help, as he used to perform better at school, when this was available to him. 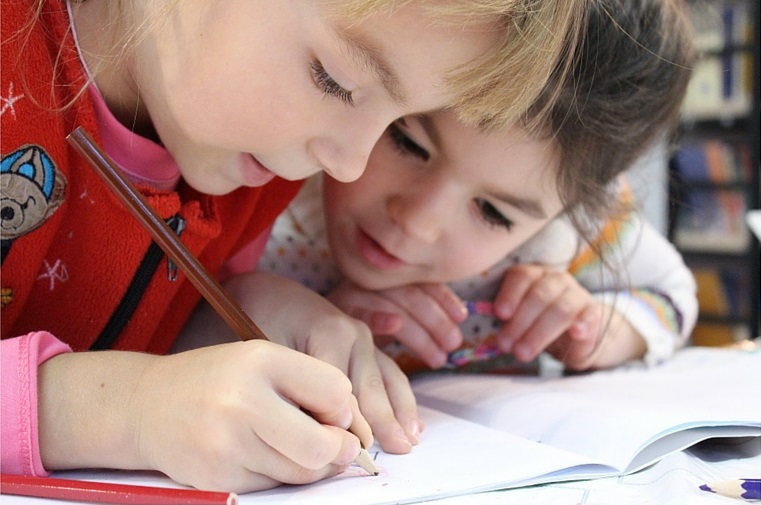 In the consultation events, practitioners and carers appeared interested in finding out what differences there are/have been in terms of the supports that have been put in place for these young people depending on who they lived with (i.e. either with birth parents, foster carers, kinship carers, or adoptive parents, in residential care or subject to a residence order). Questions were also raised regarding statements of educational needs (SEN), whether they made a difference, and about their timing (were they received too late?).

In this phase of the study, education will certainly feature within our instruments and interview schedules. Young people will be asked about their school experience in the past, and currently (if they are still in education or training). If there are other aspects of education you think we should definitely touch on, let us know in the comment section below, or by contacting us directly.

Note: The findings from the previous phase of the study reported in this post are published in the book “Comparing long-term placements for young children in care. The Care Pathways and Outcomes Study – Northern Ireland”

This entry was posted in Phase 3 findings, Research and tagged education, supports. Bookmark the permalink.

5 Responses to What does formal education mean for care experienced young people?