Project Update 2: Placement disruptions are often not the end of the relationship

This post is a quick update of an aspect that appears to be coming through from our fieldwork so far. We are only at the early stages, and going back to the families that took part in the previous phase of the study, which was focused on long-term placements. 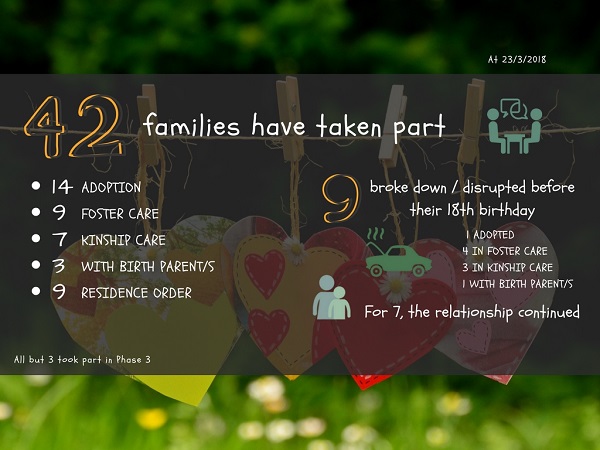 We have visited 42 families so far. The young person and the parent/carer took part in 29 cases, and in the rest, it was only the parent/carer who completed the survey. Of these 42 families, nine had suffered a placement breakdown or disruption, and in one case, the relationship collapsed after the young person (who was adopted) turned 18, and the young person left as a result of that. Of the nine placements that had disrupted, four were long-term foster care and three were kinship placements. The rest were one adopted and one living with birth parents. In two other adoptive placements, the young people went to live with the birth family for a short time when they were 17/18 but moved back to the adoptive family immediately after. However, what we found interesting was that in seven of the nine disruptions/breakdown cases, the relationships continued, despite (in most cases) the young person not living in the family home for several years.

Much of the research in placement breakdowns in foster care and adoption disruptions has focused on risk and protective factors and on how to prevent breakdown and disruption. However, there is a gap in the literature in terms of what happens after a breakdown or disruption of a long-term placement occurs. Does the relationship with the young person come to an abrupt close, or does it go on? If it does go on, how does it continue?

We were somewhat surprised at the ability of foster parents to maintain the relationship with the young people they cared for, but it should not be entirely surprising that after 10 or more years, young people and carers cannot just make feelings of love and belonging disappear. This has been discussed in the media when talking about contact between children and foster carers. Edgar (not his real name) left at 13 years of age, as his extremely problematic behaviour was endangering the whole family. However, his foster parents stayed in touch with him as he moved to various residential care homes, ended up in hospital, and recently moved into rented accommodation. His foster father visits him regularly, and Edgar, now aged 21, calls him every night. Similarly, Carl’s (not his real name) long-term foster placement also broke down when he was 13, and went to live with his birth family, then moved into residential homes, and is now living with his partner and own child. He visits the foster mother, is present in family events, and they keep in touch on the phone. He still calls her mum.

We all know that adolescence is a time full of difficulties, and placements, even long-term ones, are more likely to disrupt at that stage. However, we should not assume that because young people leave the family home, this would mean their feelings of belonging to that family cease to exist, and that their bond will be lost forever. We have witnessed the emotional bond that long-term placements can foster, which can be extremely powerful, given the huge difficulties they have to overcome.

This entry was posted in Project Update, Research and tagged belonging, disruption, family. Bookmark the permalink.

2 Responses to Project Update 2: Placement disruptions are often not the end of the relationship