Phd Student Craig Wallace traces the influence of the Middle English poem Sir Gawain and the Green Knight in the landscape and language of Alan Garner’s Boneland. 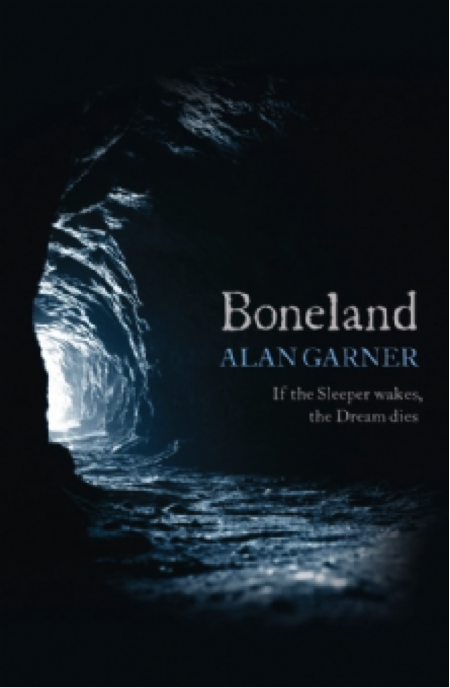 Alan Garner’s most recent novel, Boneland (2012), features the siblings Colin and Susan Whisterfield, characters previously introduced as children over fifty years ago in his first two novels The Weirdstone of Brisingamen (1960) and The Moon of Gomrath (1963). Now an adult, Colin has no memory of the fantastical adventures and supernatural wonders of his childhood. Susan is missing, somewhere in the region of the distant stars. Colin hears her voice, still a child’s voice, in small parabolic whispering dishes at the Jodrell Bank radio telescope where he works. As well as being the concluding volume of a trilogy, the book is also structurally a continuation of other Garner novels, such as Red Shift (1973) and Thursbitch (2003). Like them, Boneland contains multiple narratives, linked by place but separated in time. Colin’s search for his sister in the Pleiades is parallel with the enigmatic narrative of an ancient Watcher searching for the Goddess on a crevice rent in Ludcrack, and attempting to frame cyclical patterns out of continual flux. The two narratives intertwine, communicating with one another though separated by many years, like the communication signals detected by the radio telescope.

Writing a continuation of Colin and Susan’s story fifty years on, Garner asks: “What happens to children who have been exposed to another dimension and are left to grow up in what we call the real world?” (Bronze Age Man 2014). Boneland opens with this exchange:

A scratch is delivered by syringe. It is an attempt to trigger a descent into the past, unearthing forgotten or repressed memories. The block of text itself seems to recede. Getting to the heart of the pain. This kind of treatment, from ‘question-begging reductive pharmaceutical plonkers’ (Garner, 2012 25), only activates violence and sickness. The nick is an external marker, emblematic of inner scars. The passage is perhaps, like many other moments to come in Boneland, and in many of his previous novels, making subtle reference to the Middle English poem Sir Gawain and the Green Knight.

Garner strongly identifies with the language and landscape of Sir Gawain and its linguistic connection with the ‘one square mile of Cheshire hillside’ that his family have inhabited for generations: to ‘emerge from the same linguistic stock as the Gawain poet and draw on the same landscape for its expression’ (Garner, 1983 49).

Gawain’s perilous journey through the realm of Logres, by ‘Anglesay’ and ‘Holy Hede’ in North Wales, to ‘the wyldrenesse of Wyrale’ (ll. 691-701) is a landscape of sacred wells and springs, and ancient forests and hills inhabited by supernatural creatures. He encounters ‘wormes’, ‘wodwos’, and ‘etaynes’ there (ll. 720-23). A mysterious castle rises out of this otherworldly landscape, where he meets the shape-shifting Lord and Lady Bertilak de Hautdesert. The parallel scenes located here during Fitt III when Gawain’s challenges are interwoven with brutal scenes from the hunt, are echoed in the multi-layered structure of Boneland. When Gawain eventually arrives at the Green Chapel he finds a forbidding terrain of deep chasms and sheer rock faces:

Hit hade a hole on þe ende and on ayþer syde,

It is here that Gawain receives the return blow from the Green Knight’s axe, leaving a nick on his exposed neck. It is a sign of his shameful fall following the deceptions at Hautdesert. He then returns to Arthur’s frivolous court, leaving the weird realm of the Green Knight behind.

The site is commonly identified today as the moss-covered Lud’s Church in Staffordshire. In an interview for BBC Radio, Garner suggests that when you are in the millstone grit crevice, that the River Dane has fractured to produce a chasm, “you do not question the poem” (Bronze Age Man 2014). It remains a terrifying place to visit at dawn on New Year’s Day.

Like Sir Gawain, the fantastical events in Garner’s novels are situated in recognizable surroundings. Ancient Ludcrack in Boneland is Lud’s Church. The legend-haunted terrain of Alderley Edge featured in The Weirdstone of Brisingamen, The Moon of Gomrath, and again in Boneland is a familiar landscape for Garner. It is the site of the Legend of Alderley, in which ‘a hundred and forty knights in silver armour […] lie in enchanted sleep […] until a day will come […] when England shall be in direst peril’ (Garner, 1963 13). The first two texts are accompanied by a detailed map of the area highlighting distinctive archaeological and geological features, many attached to the legend: the Holy Well, the Iron Gates, the Druid Stones, Seven Firs, Golden Stone, Stormy Point and Saddle Bowl. 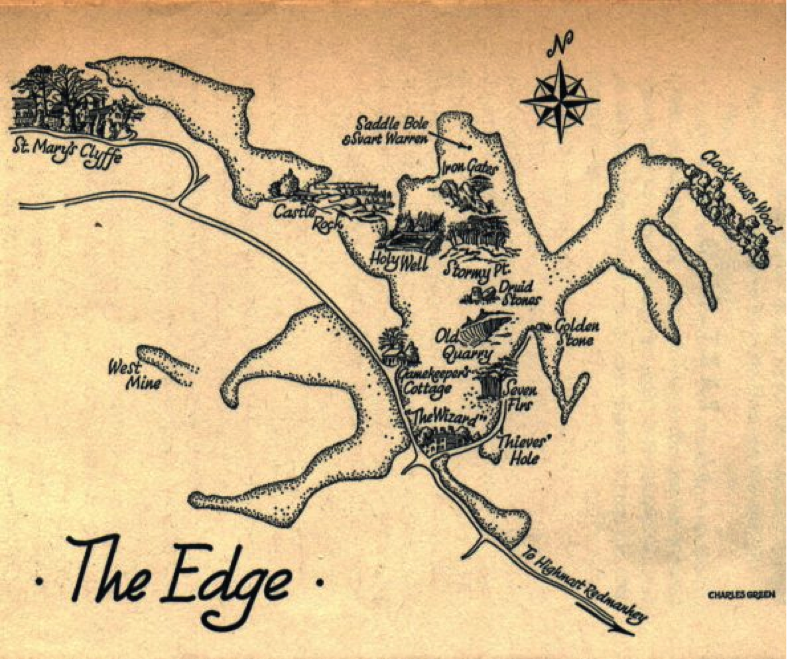 These are all genuine locations on Alderley Edge, still found today, and they form the background to the witchcraft and moon magic in the narratives. Garner attaches new folklore and legends to the geological features. The Golden Stone, a functional sandstone boundary mark, has no written or orally inherited supernatural traditions attached to it. In The Moon of Gomrath the stone is ‘rent from top to base’ by the Morrigan (Garner, 1965 128). And the boundary stone on Alderley Edge is indeed split…. 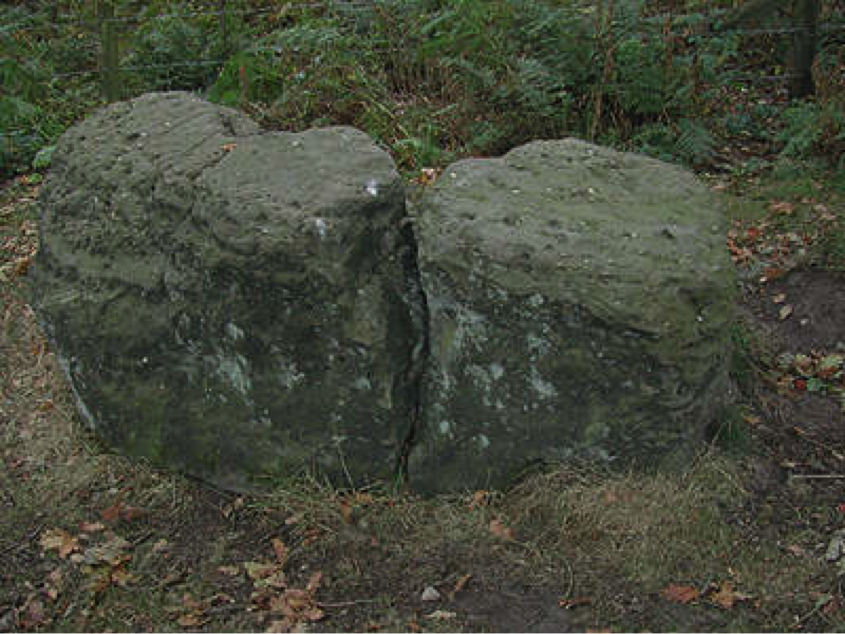 Garner describes the experience of reading the North-West Midlands dialect of Sir Gawain for the first time as a rehabilitation of his ‘natural speech’, following the imposed Standard Received English at Manchester Grammar School and Magdalen College, Oxford:

I first read the text of Sir Gawain and the Green Knight after I had begun to write, and (this is important) I read it without coercion. The text was a discovery, and I wondered why there were so many footnotes. I didn’t need many of them, nor did my father (who had left school at fifteen), if I read certain pieces to him in our shared modern Cheshire dialect. Here was an English treasure, yet, because of my natural use of its language, I’d had my mouth washed out with carbolic soap by a well-meaning teacher when I was five years old. I had been guilty of the sin of ‘talking broad’ (Garner, 2006 11).

Garner had rediscovered his own vocabulary in the cadence of the poetic text. It was a lifeline that retained a sense of a national identity continually under threat over time. There are allusions to the survival of the poem’s dialect in Boneland, when Bert (Bertilak?) the taxi-driver informs Colin, in reference to the duration of his working shift, that he ‘is the governor of this gang’ (Garner 141). Similarly, in The Stone Book (1976), a novel steeped in the vocabulary of Garner’s Cheshire, the Father states that when left at work alone on the church steeple he is ‘the Governor of this gang’ (Garner, 2006 7). These are of course references to the Green Knight’s entrance into Arthur’s court when, after scanning the noble company seated high on the dais, he undermines their elevated position and status by asking: ‘Wher is […]/ The gouernour of this gyng?’ (ll. 224-5). The language of the poem is easily accessible and understandable for the Garner’s and idiomatic expressions survive through successive generations inhabiting the same Cheshire landscape over many centuries.

The movement of time is not linear in Garner’s novels. As Colin in Boneland suggests: ‘Time is multi-dimensional and exists in different forms’ (Garner 83-84). It is patterned on personal history and identity connected with landscape and legend. Scratching surface layers reveal a past coexistent with the present. Boneland and the medieval text of Sir Gawain are linked by setting and dialect, but also by the failure to recognize a sacred connection with the natural landscape, spiritual values, identity and heritage. In Garner, landscape and language are threatened by loss through material values, Capitalist homogenization, the commercial destruction of the environment and violent acts of architectural vandalism.