Currently an MA student in the School of History, Rebecca Mason fills us in on her upcoming funded PhD project with the University of Glasgow… 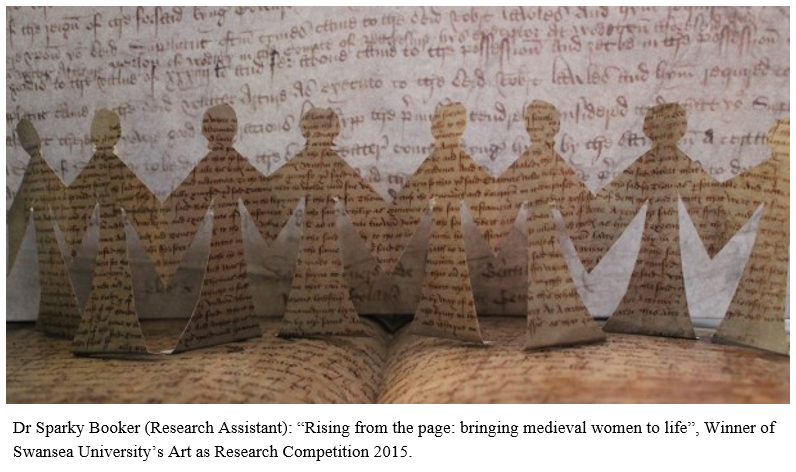 I will soon begin reading for a PhD in History at the University of Glasgow on an Arts and Humanities Research Council (AHRC) funded project entitled “Women Negotiating the Boundaries of Justice: Britain and Ireland, c.1100-c.1750.” The project is directed by the Principal Investigator, Dr Deborah Youngs of Swansea University, along with Co-Investigators Dr Garthine Walker (Cardiff University) and Dr Alex Shepard (University of Glasgow). The team also comprises two Research Assistants, Dr Sparky Booker and Dr Emma Cavell, based at Swansea and Cardiff.

The project investigates how women in Britain and Ireland, c.1100-c.1750, actively participated in the legal process, the choices available to them, and the obstacles and opportunities they confronted. In challenging the view that women were simply passive recipients of legal judgements, the project will explore the strategies they used to negotiate and even subvert the law in order to achieve their objectives. My PhD research project is entitled ‘Married Women and the Law in Scotland, 1600-1750′, with my dissertation focussed on the agency of married women before the law in Scotland between 1600 and 1750. The research will be structured around a comparison of married women in the Highlands and in Lowland Scotland and is designed to establish any differences between wives’ legal agency in very different parts of Scotland, and then place this comparison in a broader historiographical framework relating to women and marital property law in Britain and Ireland. The practices and outcomes of litigation will be compared with the principles and ideals in legal publications and statute law that began to circulate in print during this period. Cases involving single and widowed women will also be sampled, in order to establish the impact of marital status on women’s legal access to and defence of property rights in comparison to ‘never married’ and ‘ever married’ women. Close attention will also be paid to the influence of differences in wealth, social status and kinship ties on married women’s access to justice and legal resources.

This exciting new project will further understanding through its comparative focus; we do not assume a single relationship between women and the law. Rather, as a team we will explore the extent to which their experiences were influenced by national boundaries, language, ethnicity, confessional identity, life-cycle stage, and social status. The sources for the project include the records of both secular and church courts and encompass civil, canon and criminal jurisdictions. This range of sources allows us to assess the impact of different jurisdictions on women’s’ agency. It also helps us to understand the ways in which women voices were mediated by attorneys, the requirements of legal processes, and their own strategic aims.

To see and hear more details on the project, see: