The question as to whether contemporary America is “post-racial” has been widely debated in recent years, with many believing the United States is free of the tumultuous racial animosity which began plaguing the nation in the wake of slavery’s abolition. Issues of race are once again of vital cultural importance now the United States has twice elected a black president, leading to suggestions that American racism has ended or even that whites are now the victimised group (Cabrera, 768-784). Racial tensions have erupted in recent years, with issues rising in spite of the supposed equality: police brutality, hate crimes, and an ever-apparent economic disparity between blacks and whites (Wilson).

In her contemporary text, Citizen: An American Lyric, Claudia Rankine explores what it means to be black in modern America: outlining racial experiences perhaps not understood, and certainly not experienced, by many outside the African American community. Through use of her powerful text, Rankine has defined the black experience in postmodern America, drawing on the deep-seeded anger of African Americans forced to whitewash themselves in a supposedly non-racist society which is nevertheless grounded on whiteness. 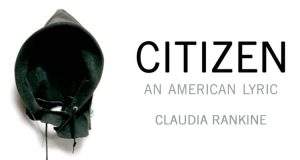 According to Hennessy Youngman’s YouTube video, “How to Be A Successful Black Artist,” modern black men must adopt an “angry nigger exterior” in order to be successful. Youngman explains that this visage—which embodies internalised black rage, can be achieved through observing needless violence and reminders of African American oppression, such as pit-bull fighting, the Rodney King beating, or several examples of violence against African Americans and fallen civil rights heroes. Rankine draws upon Youngman’s YouTube video in her text, Citizen, noting his passion for educating viewers on contemporary art issues and his perspective that “black people’s anger is marketable” (23). She has utilised Youngman’s work in the opening of Citizen‘s second chapter, which moves beyond the simple examples of racist experiences outlined in chapter one, in order to explore African American anger, and the stigma attached to stereotypically black behaviour.

Although careful to avoid encouraging violence, Youngman clearly references black anger as a resource which African Americans can tap into order to achieve the “nigger exterior.” Citing anger as an intrinsic quality in African American culture, Youngman claims that this black rage can be owned and exploited as a means of entertaining white people, who want to observe the “exotic other” and view African Americans as a spectacle. In his description of black qualities, Youngman depicts black anger as a performance designed to attract and entertain white people, who have come to expect the “angry black nigger”—an expectation to which the performer must adhere. Rankine describes this as “commodified anger” connected to the “performance of blackness” (23). Moreover, she suggests that this artificial anger creates inherent difficulty metabolising real rage, noting the dehumanising nature of this interpretation of black culture as spectacle. 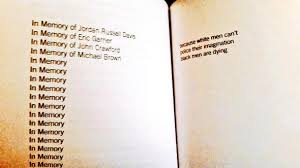 As is outlined by Kate Kellaway in her review of Citizen, titled “the ugly truth of racism,” contemporary America is far from escaping its racially-conflicted past. Drawing on several examples from Rankine’s Citizen, including a mother sparing her daughter from sitting next to a black person on a plane, Kellaway discusses the Rankine’s exploration into modern racial sensitivity, noting: “There is no first person here, just a “you” to keep things free. Once again, I am conscious of the friction between my wish to pin things down and Rankine’s to pull towards universality.” This supposed universality implies lingering racism in modern America, despite being centuries beyond the abolition of slavery and existing in the time of America’s first black president.

“I feel most colored when I am thrown against a sharp white background.” (Rankine, 53)

Littering Citizen with artwork distracting from her text is Rankine’s method of disrupting the flow of her own work, through use of images that reflect the mood of the racially-charged bestseller. Rankine has used Glenn Ligon’s artistic appropriation of Zora Neale Hurston’s statement: “I feel most colored when I am thrown against a sharp white background,” a phrase written in increasingly-indecipherable bold black lettering, standing in sharp contrast to the white background. The text is displayed is such a way that it reflects the words written, and the meaning conveyed through the text: black identity stands out against a white background, and American society is a perpetual white background, with black culture and mannerisms serving as a sharp contrast. 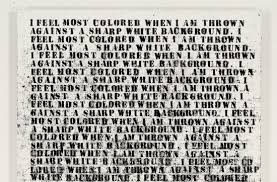 Rankine outlines this contrast between black and white in her explanation of Serena Williams’ experience of racism and responsive rage during her career as a tennis icon. Rankine asks: “What does a victorious or defeated black woman’s body in a historically white space look like?” Many of the hurdles Serena and her sister Venus have faced evidently have racist undertones. Rankine draws attention to a particular example, in which Mariana Alves, “distinguished tennis chair umpire,” made five poor calls against Serena, who responded in a notably dignified manner (26). Serena released her anger seven years later, prompting a visceral reaction from spectators, who observed the inappropriate response and behaviour of the black sportswoman, unaware or perhaps uncaring of her years of being judged harshly against the white background.

Rankine has used Citizen as a platform to discuss racial issues in contemporary America, drawing attention to the fact that the abolition of slavery, steps towards social equality, and the election of a black president haven’t resulted in the end of racism—a phenomenon which is deeply embedded in American society. Through universal examples offered in Citizen, it’s apparent that African Americans consistently experience racism as part of their everyday life. Moreover, in order to be successful, black Americans must either make a spectacle of their race, or embrace whiteness, in which case they will inevitably stand out as colored against the sharp white background of society.

“How to Be A Successful Black Artist.” Youtube, uploaded by Hennessy Youngman, Oct 7.2010, https://www.youtube.com/watch?v=3L_NnX8oj-g

In Coates’ writing of the National Book Award Winner Between the World and Me, he does not hold back on showing his anger at the livelihood of a black man in America, highlighting the dangers and stresses he has personally faced as one in the mass of people victimised in America. This anger percolates each sentence in his letter addressed to his son Samori. Coates uses the epistolary form effectively, telling of the differences between Coates’ own youth and upbringing and that of his son, and yet there is a constant insecurity of being black in contemporary America – something that Coates doesn’t see changing.

A defining point in his son’s education of the ongoing history of the ill treatment of the black people in America is the injustice surrounding the shooting of Michael Brown, believed to have been surrendering to the police before being shot six times. Coates states:

That was the week you learned that the killers of Michael Brown would go free. The men who had left his body in the street like some awesome declaration of their inviolable power would never be punished. It was not my expectation that anyone would ever be punished. But you were young and still believed. (Coates, 11).

Coates furthers upon his argument by averring that he “didn’t hug you… comfort you, because [he] thought it would be wrong to comfort you. [He] did not tell you that it would be okay, because [he had] never believed it would be okay.” (Coates, 11). In directly addressing his son, and the reader, Coates delivers his view on the injustice that permeates American society. His frank declaration on the objectification of the black body – that which has never been, isn’t and never will be secure – highlights the mentality of the black male (or female) as one with a rendered sense or lack of identity, powerless to the white aggressor. Henderson recognises the power of America’s coloured past acknowledging that “the legal and social discourse of slavery created a national language for the propagation of mythological half-truths and socially sanctioned phobias about African men. Their progeny, descendants of this legacy, inherited a birthright unlike any other group.” (Henderson, 139). These phobias relate to Coates’ writings on the commodification of the black body as something that does not belong to the rightful owner. Coates recalls an incident in his childhood of a “light-skinned boy with a long head and small eyes” (Coates, 19) who by holding a gun was also “holding [Coates’] entire body in his small hands” (Coates, 19). Coates’ identity is stripped away from him as he is reduced to a tool or a weapon. Coates’ mind-set equates his black body with the gun in someone else’s hands.

Coates reiterates to his son the perils of living in America as a black man, by reminiscing the past of America, i.e. slavery. With a lack of identity and knowledge of his suppression, Coates reclaims control over what little he can, as:

We could not control our enemies’ number, strength, nor weaponry… But whether you fought or ran, you did it together, because that is the part that was in our control. What we must never do is willingly hand over our bodies or the bodies of our friends. (Coates, 69).

Here Coates shows the overwhelming force against the black body as singular and definitive. Yet he believes in the community of black individuals that are brutalised together. Furthering this, he personifies slavery as a “particular, specific enslaved woman, whose mind is active as your own, whose range of feeling is as vast as your own.” (Coates, 69). By personifying slavery itself, Coates shows how each person in the black diaspora of slavery was an individual, and “not an indefinable mass of flesh” (Coates, 69). Coates echoes the idea that “Black people’s humanity is a fairly new discovery,” (Jackson, 9) by linking the past of slavery with the current treatment of the black body in today’s society. He creates a living link between those who suffered and died in slavery and those of today who are still suffering and dying by oppressors. Coates’ writing acts as a memoir to the past, present and in his eyes future suffering of the black people in America.

Coates argues against the treatment of the black body by highlighting the way actions of another will be irrevocably placed on his son, as he informs his son, “you must be responsible for the worst actions of other black bodies, which somehow, will always be assigned to you.” (Coates, 73). Here he shows the mentality of his oppressors that remove their individual identities in favour of a systematic ‘white and black’ duality. This duality of ‘us against them’ is a fragment of the “historical continuity here that speaks to the perpetuation of the white racist imago of the Black body, where there is an attempt to ontologically truncate the Black body into the very essence of criminality, danger, suspicion” (Yancy, 7). The black bodies that Coates speaks of are never shown in a positive manner but inherently negative. His son shall carry the burdens (and the worst) that other black bodies have carried out. In Coates’ teachings to his son, the modern blanket term of ‘white people’ see no positives in the black body. Coates furthers his argument by stating that “race is the child of racism, not the father” (Coates, 7) and that white people are “a modern invention” (Coates, 9), a term that has “no real meaning… [as] the new people were something else before they were white – Catholic, Corisican, Welsh, Mennonite, Jewish” (Coates, 9).  Coates undermines the base argument of racism through his condemning of the term ‘white’. If ‘white people’ are in fact something else such as Catholic or Corisican, then black people can be for once seen as human.

Coates, Ta-Nehisi. Between the World and Me. Melbourne, AU: Text Publishing Co, 2015.