In 1917, while working with bacterial isolates from wounded World War soldiers in France, Félix d’Herelle published what he called the discovery of “an invisible, antagonistic microbe of the dysentery bacillus”. d’Herelle had  discovered bacteriophages, viruses that infect bacteria. One hundred years later, phage research is intrinsically linked to other major scientific events: from the identification of DNA as the genetic material, all the way to the discovery of CRISPR-Cas systems.

This year, it was with excitement that I I flew to Paris to attend the 100th anniversary celebration of bacteriophage research at Institut Pasteur, the “cradle” of bacteriophages and, arguably, the most important microbiology research institute in the world.

Over the course of 3 days, I was honoured to listen to world-class scientists sharing major breakthroughs in phage research and, as a REMEDIATE scientist working on environmental virology myself, I received the honour of sharing my own findings with the rest of the phage scientific community in what was a very special event.

From studies on global ocean viromes and biogeochemical cycling, to studies on phage therapies as solutions for antibiotic resistance, these 3 days in Paris showed that phage research is booming all around the world and that it is as important as ever before. One can only wonder what the next 100 years of phage research will bring! 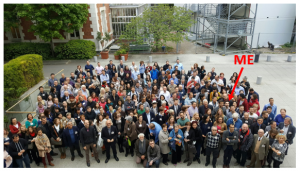