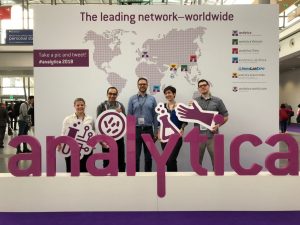 Together with four of my colleagues from the University of Duisburg-Essen, I’ve spent the last week at the fair in Munich. The reason for traveling 600 km to the south of Germany was to participate in Analytica 2018 – a trade fair and conference with the overall theme of analytical chemistry. Overwhelmed by both the academic and commercial side of this event, I decided to update my blog and introduce the readers to some novel developments in the world of analytical chemistry.
A fair has been organized every two years in Munich since the late ‘60s, with the aim of helping vendors and developers of analytical instruments get in touch with potential users of their measuring equipment. This year more than 1100 exhibitors from almost 50 countries presented their products to more than 35000 visitors at the fair. Exhibitors and visitors came from many different backgrounds – in my three days at the fair I talked with analytical chemists, mechanical engineers, material scientists, IT professionals, even medical doctors. Regardless of the differences in their backgrounds, I was very interested in their needs and expectations when it comes to chemical analysis. Aside from the normal expectations that an analytical chemist like myself hears every day (low detections limits, high precision etc), I was often told that full automatization of the analysis and real-time artificial decision-making during the production process was needed. These ideas require two main ingredients. First is a sample preparation unit capable of performing every lab task one can think of; from reading what’s written on the vial, to changing the syringe or the liner of the gas chromatogram. Second is a computer, or a network of computers capable of deep learning that would analyse gigabytes of analytical data at a time, and combine them together to describe or even control a production process. Seeing how high the bar was set, I was surprised to see that many vendors were successfully coping with these requests set by their customers.

Cutting-edge development by industry shown at the fair was complemented successfully at the conference. Sessions were organized on many analytical ‘hot topics’, from microplastics, toxicology, biosensors all the way to deep learning and data-mining. One of the sessions that I enjoyed the most was the one named “Analytical Challenges from Implementing Consumer-Oriented Legislation”, in which the chairman and a lot of speakers were involved in the Joint Research Centre (European Commission). Lectures given during this session helped me realize how big a gap there is between research analytical laboratories and legislative bodies, and how desperately we, the citizens of EU, need more bridges over these gaps.

I gave my contribution to the overall scientific content of the conference by presenting my poster. Although the poster session itself was at a somewhat isolated location, not really visited by that many people, I still managed to grab the attention of a couple of visitors. I tried to explain to them not only what is it that I do, but also, how my work fits within the scope of the REMEDIATE project, and what benefits for the overall populations will come as a result.

Often after visiting conferences I wonder how much of the presented work is actually applicable in real-life situations. From the academic point of view, one develops the method, often in a very non-elegant and user-unfriendly manner, as long as it allows for the determination of previously uncharacterized events. Industry on the other hand is very focused on creating an intuitive environment for a wide variety of end-users, but often at the expense of performance.
As somebody who is currently working in academia, but would like to switch to the industry soon, Analytica 2018 was one of the rare opportunities to get right in the middle of yin and yang, between academic and commercial sides of analytical chemistry. It brought some new ides for the future projects, helped see the general trend in which the analytical chemistry is going, pointed out the current weaknesses and revealed the fields in which work is needed. Certainly, for a student of a final year of a PhD, it was a very valuable experience, that I would like to repeat again. See you in Munich, at Analytica in 2020.