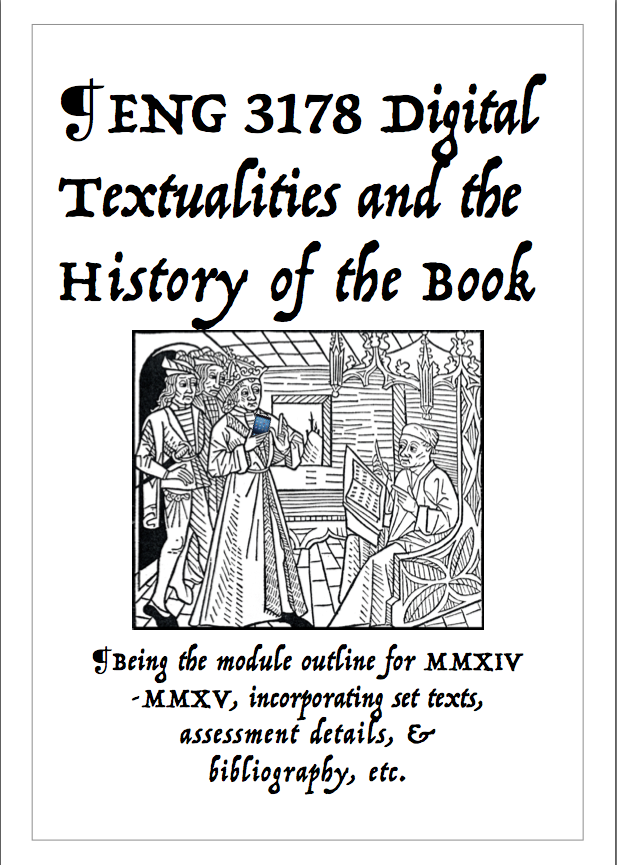 A rather different blog post from usual this time, as we team up with Dr. Stephen Kelly from the School of English and some of his final year undergraduate students to showcase a selection of student projects from a new third year module – ENG 3178 “Digital Textualities and the History of the Book” – which ran for the first time last year.

“The book is arguably the most important technology in Western cultural history, but with the advent of hypertext, e-readers and tablets, the death of the book is being declared with greater frequency and urgency.

The module introduced students to the emerging disciplines of book history and digital humanities by taking the historical development of the codex, the printed book, and electronic textuality as the basis for an assessment of the materiality of textual meaning. The module assessed alarmist critiques of digital culture and its impact on ‘traditional’ literacy practices and media by exploring the manner in which textuality has played a key role in the articulation and maintenance of cultural and political authority from the Middle Ages to the present.

For assessment, students were invited to reflect creatively on the history and future of the book. Students spent six weeks working with materials held in Special Collections, as well as reading contemporary fiction that makes an explicit theme of the materiality of the book.” 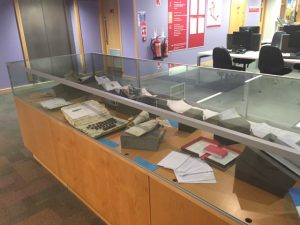 A selection of these student projects, together with relevant materials from Special Collections’ holdings are currently exhibited in the display case on Floor One of the McClay Library, and are showcased below. 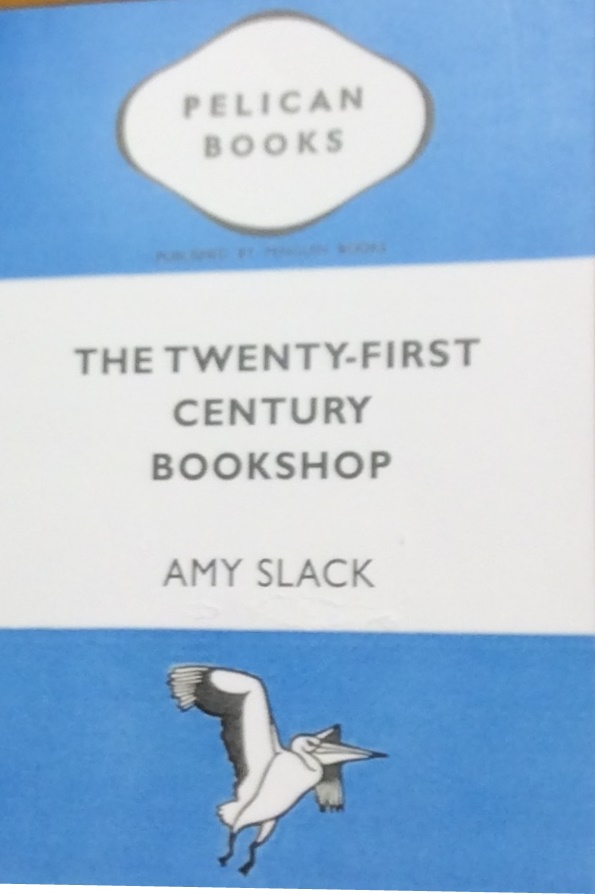 Amy’s project wittily reproduces the formatting of a Pelican book, Penguin book’s non-fiction imprint, which ran from 1937-1984.  Amy interviewed local bookseller David Torrans of No Alibis, as well as the manager at her local WH Smith in England, to produce a powerful defense of the continuing relevance of the bookshop to contemporary culture. 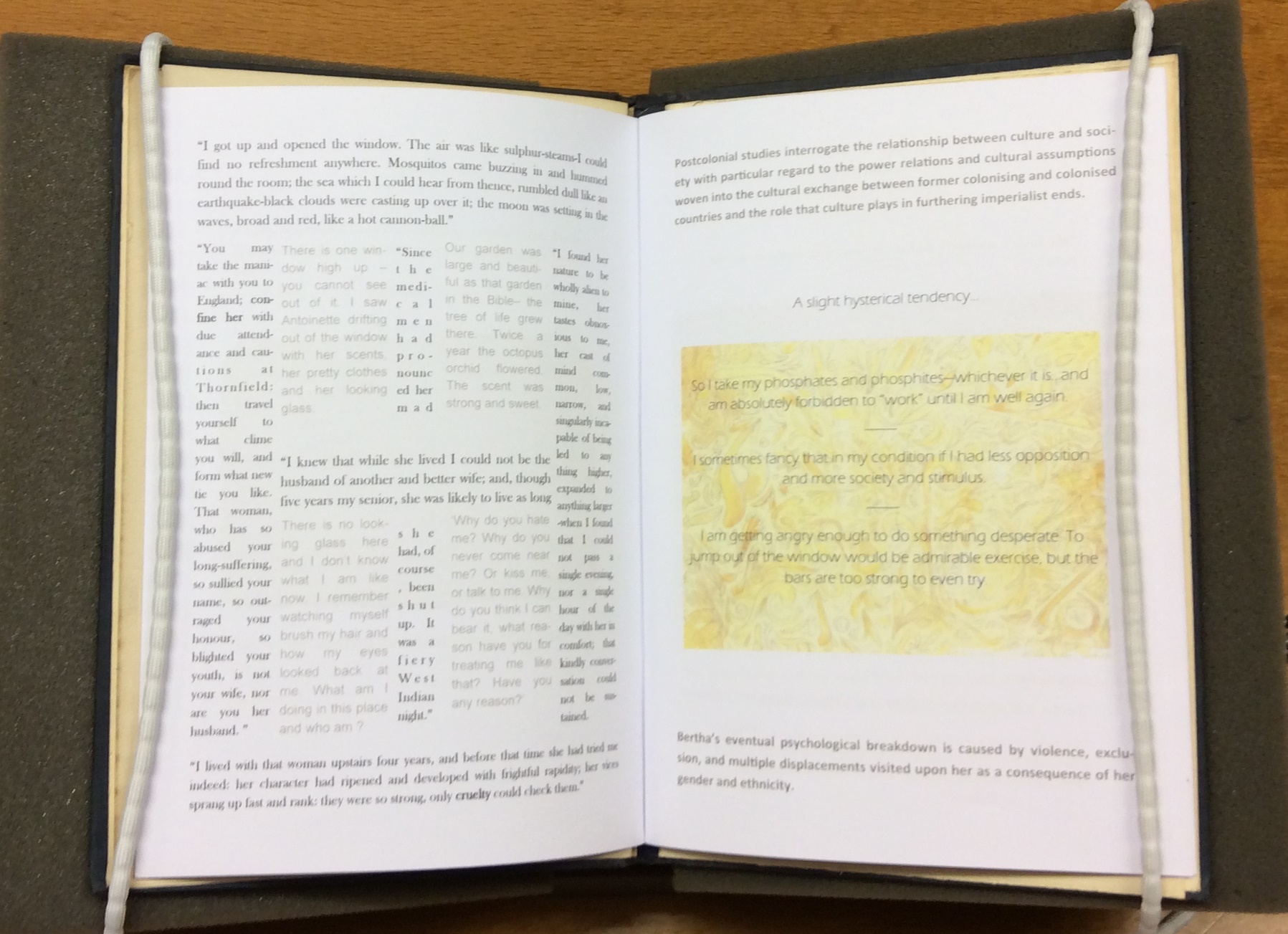 Peter’s project took inspiration from the typographical experiments of works such as Danielewski’s House of Leaves.  In this project, material from the Jean Rhys novel Wide Sargasso Sea, a sequel to Bronte’s Jane Eyre, contaminates Bronte’s original novel to powerful effect. 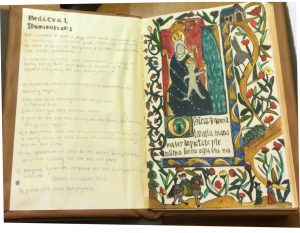 Lindsay has expertly emulated the book-making techniques of medieval bookbinders, and has even produced an extraordinary frontispiece that mimics the elaborately illustrated Books of Hours that proliferated across Europe from the fifteenth century. 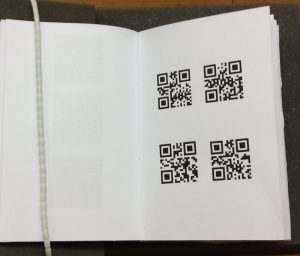 Niall’s project, entitled Cicada, is a ‘book’ bound in mirrors, comprised of chapters ‘written’ in QR code, braille, binary, waveforms, and audio files.  Niall’s project is influenced variously by writers such as William Burroughs and philosophers such as Jacques Derrida. 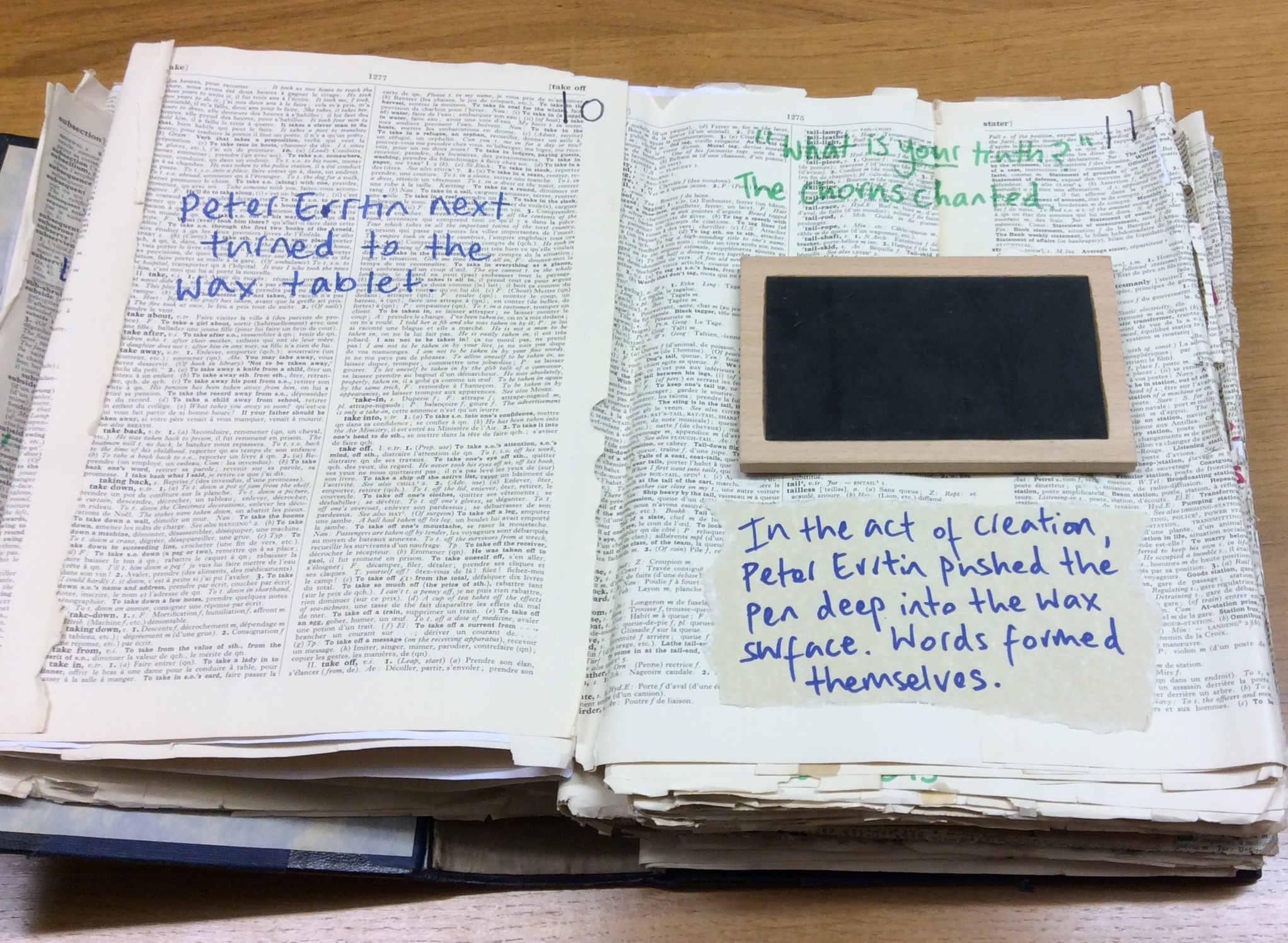 Creative writer India has produced a ‘biblio-fiction’ entitled Peter Ertin (anagram of ‘interpreter’), an extraordinary, Borgesian ‘book of books’ from the origins of writing to the ‘death’ of the book in the form of an Amazon Kindle. 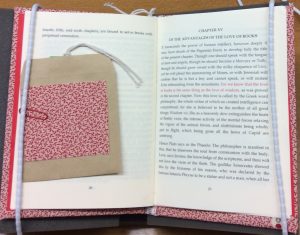 Emma has made a playful edition of the medieval bibliophile’s Richard de Bury’s eulogy to the beauty of books, the Philobiblon. 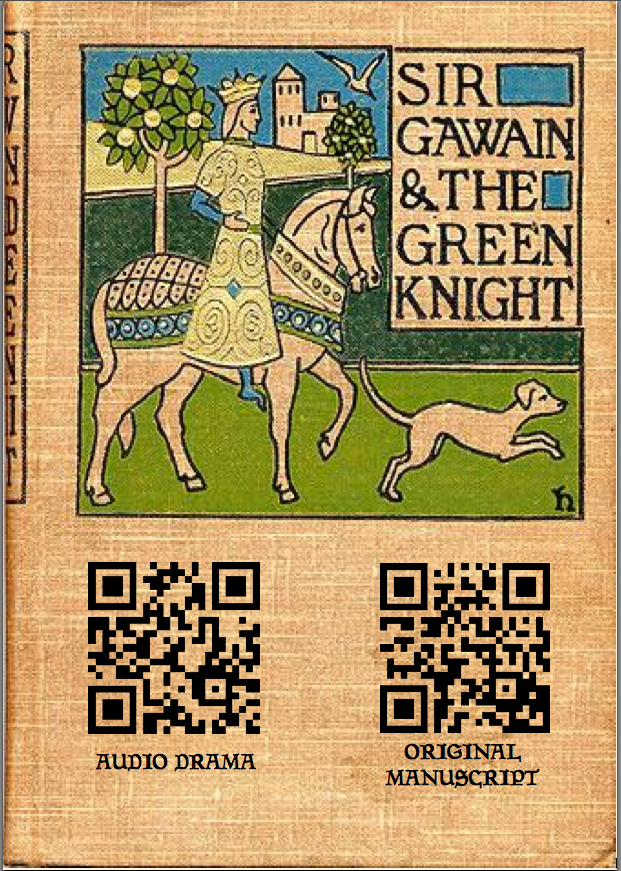 Carrie created a digital edition of a fitt of the Middle English alliterative poem Sir Gawain and the Green Knight, using QR codes and hyperlinks for textual apparatus.  Carrie’s project plays with the skeumorphism of digital books and medieval codices. 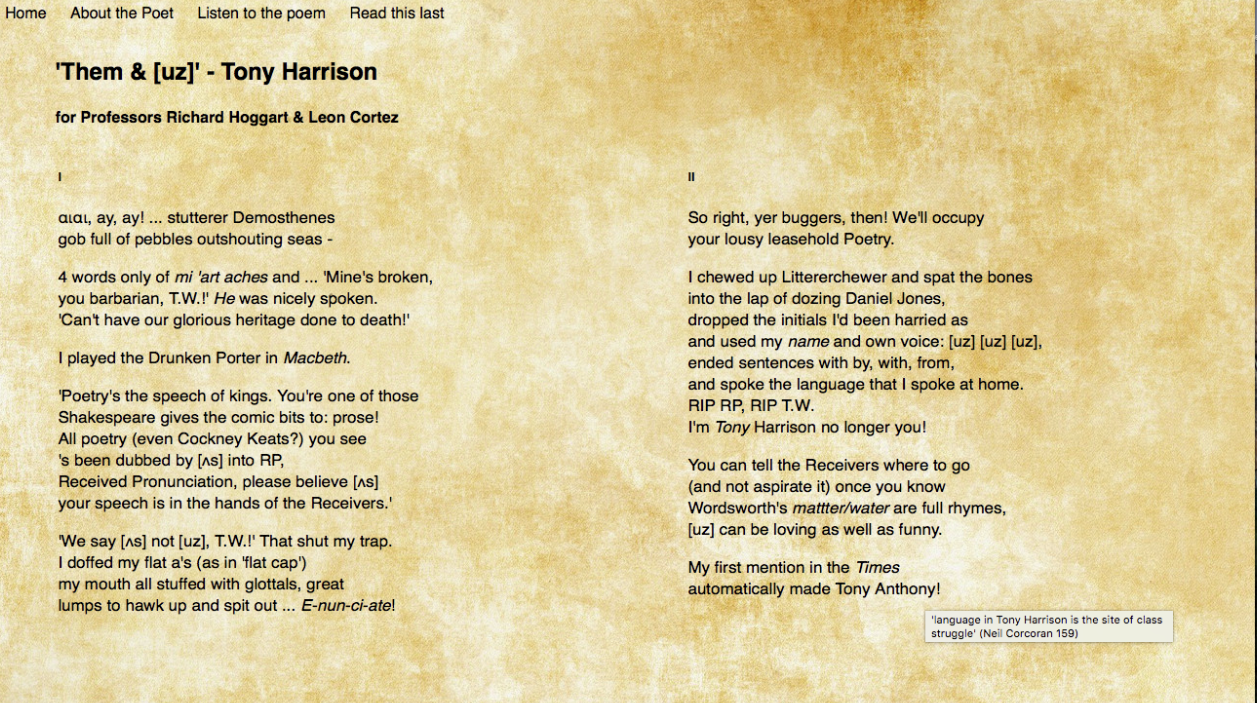 After teaching himself HTML, CSS and a touch of JavaScript in just two weeks (!) Liam produced a multimedia edition of Tony Harrison’s poem ‘Them & [uz]’. 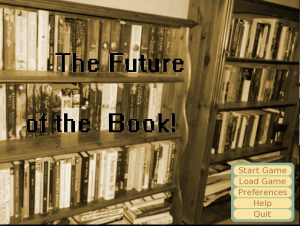 Rebecca created a ‘visual novel’ and all the accompanying digital assets, produced on the Renpy platform. Like Liam, she too mastered the necessary programming in just a few weeks. 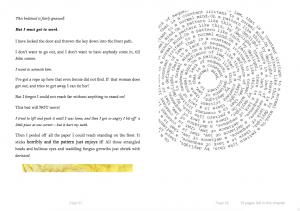 Donna’s project was a superb re-versioning of an important early work of American feminist literature, Charlotte Perkins Gilman’s The Yellow Wallpaper. Influenced by Danielewski, the typography and layout in Donna’s version work to emphasis the psychological collapse narrated in the short story. 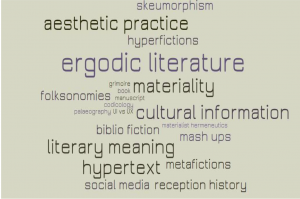 Other student projects included Keelin Stewart’s hand-made book, which recorded, in a witty and self-deprecating diary of its own production, the challenges she faced in emulating the production techniques of medieval book-binders. The goal of Rebecca Barkley’s iBooks edition of Oscar Wilde’s The Selfish Giant, which used music, audio, and images, was to explore the potential of electronic literature to re-engage children in the pleasures of reading. Dervla McGaughey’s project, ‘the rest of your life’, explored the narrative potential of the Twine platform for digital fiction. Robbie Montgomery set himself the task of digitising the ‘un-digitisable’ – Anne Carson’s Nox.  In presenting only the text of Carson’s poem, and in providing ekphrastic accounts of the many images Carson’s accordion-book uses, Robbie’s project produces a hauntingly stripped-down version of the work, which in many respects amplified the emotional energies of the book.

As can be seen, the assessment elicited a fantastic range of responses from the students involved  – incorporating the creation of digital editions, explorations of new technologies, and emulation of centuries-old book making techniques – with each project responding to the concerns of the module in innovative and diverse ways. 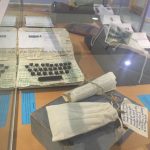 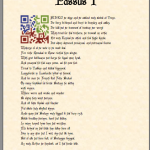 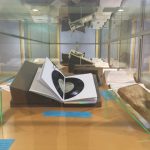 The links below hint at some of the wealth of online resources and tools students made use of and responded to during the course of the module.

Echoes from the Vault: https://standrewsrarebooks.wordpress.com

On Books and Streets – An approach to Cultural History: https://

Quill: On Books Before Print: http://www.bookandbyte.org/quill/index.php

Resources for the History of Books and Printing: http://www.english.upenn.edu/~traister/hbp.html