Epidemiology, the science of understanding disease, can offer much guidance to those wishing to understand how different people experience different levels of emotional hardship. As such, the Grief Study has been trying to keep pace with recent developments in one particular problem set of Epidemiology, namely how to isolate the effect of one particular exposure category on one particular outcome.
The Grief Study is attempting to isolate the effects of bereavement on mental health problems. In our study, bereavement is the exposure variable and mental ill-health, the outcome. The key danger we are trying to minimise is that of confounding, that is to say mistaking the effect of some other influence on mental health for that of bereavement.
Here’s an analogy. Imagine you wanted to examine the effect of drinking coffee on the risk of developing cancer. Here’s how we might phrase this: What is the additional likelihood of having developing cancer incurred by being a coffee-drinker versus not being a coffee-drinker? 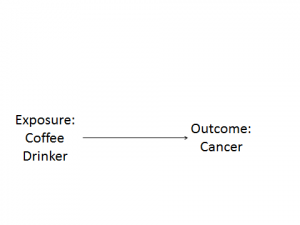 In effect we’re trying to assess (a) whether there’s enough of an effect to justify there being an arrow between coffee and cancer and (b) the size of that effect. (We might imagine that the stronger the effect, the thicker the line we would draw.)
So to examine this, we take information on coffee drinking and cancer diagnostic history for a sample of people. Say we do this and find strong evidence for coffee drinkers suffering more often from cancer, e.g. twice as many coffee-drinkers suffer as non-coffee drinkers. However, we could not submit such a conclusion, until we first considered the possibility of confounding.
We would consult with the literature on other known causes of cancer and consider. Here, the risk of cancer to cigarette smokers is an example (and probably Epidemiology’s most famous discovery). We might reason, coffee drinkers may be more likely to smoke cigarettes and vice-versa. Therefore, any estimate of the risk to coffee drinkers which did not also consider the risk to of cigarette smoking would inevitably be misleading. 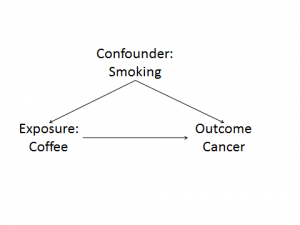 The statistical methods to deal with these types of problems within models such as multiple regression or multilevel analysis are established and evolving continuously. You could even argue that the issue of identifying confounding is more of a challenge to imagination, quality thinking and awareness of existing literature than to statistical skill per se.
The diagram above is a very basic example of a Directed Acyclic Graphs, or DAG. DAGs are tools used to map out the influence of interest alongside other related influences. This involves identifying confounder factors which influence both likelihood of exposure and likelihood of outcome. Those confounding effects can then be modelled statistically so as to remove any bias from the main effect of interest.
Returning to the problem at hand and the effect of interest in the Grief Study, the effect of bereavement on mental health problems: 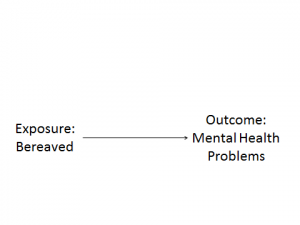 As with our first example, we can quickly think of confounding effects. For example, having poor general health increases likelihood of poor mental health. It is also associated with poor household-level conditions such as poor diet and lack of home insulation. These are known risks for mortality and therefore also increase risk of bereavement. 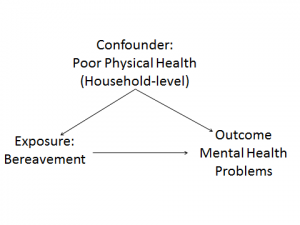 Therefore, when planning our analysis, one of the factors we need to account for is physical health.
In part 2 of this post, we describe the various DAGs we’ve used to frame our analysis in the Grief Study. These may look quite complex at first glance, but the building blocks are the same as above: a network of factors existing influencing either bereavement or mental health problems. Our challenge is to first identify those factors affecting both, and to specify the pathway by which they could confound the estimated effect.

The above serves as a basic introduction to the idea of confounding and the application of DAGs to this problem set. If you have any good examples to share with us, or believe we could be more clear in our explanation, please comment or contact us.