A PATHWAY, A LAUREATE AND A DREAMY PhD CANDIDATE by Solomon Oguche

Does a biological cell strike you as something that has not only perfected making molecules and signals but has also developed a highly organized system for them to where they’re needed? It should because cells are unrivalled in this regard. This is accomplished in part through a system now regarded as the secretory pathway and much of our understanding of this is due to the work of a very remarkable scientist I had the pleasure of meeting in July 2019.

As background, the inside of a cell is organized into compartments specializing in different roles, some coordinate stuff (e.g. the nucleus), some make stuff (e.g. the endoplasmic reticulum) and some break and recycle things (lysosomes and peroxisomes). The secretory pathway serves as the postal service system between these compartments and also for communicating with outside the cell. As you would expect, a lot goes into organizing and making sure the right things get to the right place. To do this, the cell has developed a complex system that is both elegant and efficient, it makes Amazon and DHL delivery look like operations run by kindergarten pupils. Since ‘mis-sorting’ and ‘mis-delivery’ will not result in a mere angry phone call from a frustrated customer but disease and death, the secretory pathway is designed not to fail.  Under normal circumstances, it doesn’t.

The secretory system deploys small sized lipid membrane-bound vesicles as couriers. It recognizes and interacts with molecules using distinct molecular tags that determine their properties, origin and destination and passes them between the endoplasmic reticulum and Golgi apparatus and the cytoplasm before arriving at their final destination within and outside the cell. These vesicles ensure that molecules that are harmful just floating around exposed in the cell are kept out of it or those best kept concentrated are packaged nicely together.  There is so much more detail to this, however.

Dr Schekman and other researchers helped to clarify a lot of what is known about this important pathway using yeast cells with mutations and malfunctions in this system. By painstakingly studying how each mutation and defect affects the transport of molecules through this system, they were able to tease the mechanistic details of cellular transport.  For this, he received the Nobel Prize in 2013 “for their discoveries of machinery regulating vesicle traffic, a major transport system in our cells”. His recent efforts are in understanding how microRNAs are sorted into a type of vesicle called exosomes and exported outside the cell. This is incredibly similar to the central question of my thesis research: how are microRNAs in exosomes useful for identifying and understanding endocrine disruptor compound effects?. During our meeting in Santiago Chile, Dr Schekman offered excellent insights into this process and helped to point me to resources that have been very useful to my work. Even more remarkably, he field and answered my many questions and many our interaction seem peer-like.  I left feeling like I could be a laureate too. It costs nothing to dream right? 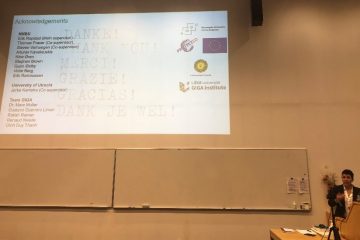