In my first year at Queen’s, I remember sitting in a tutorial with a handful of other students and the conversation turned to exams and resits. The lecturer explained that a few people always end up having to retake the year, and that in some rare cases, students have repeated two years.

“Repeating two years? That’s mad”, one of the others joked. “If you’ve got to that stage, surely you would just take the hint that you’re not cut out for medicine.” The lecturer laughed and we all joined him. Because it did seem like madness, like flogging a dead horse.

If you’d told me then that a couple of years down the line, I’d be sitting shaking in front of that same lecturer about to repeat a third year, I wouldn’t have believed you. No-one plans to go down that route. No-one thinks it will be them. It’s been six years since that tutorial – the other five students present that day are all now working as doctors and I’m three years behind, still a student.

I used to be completely convinced that I could never talk about this sort of thing. Then about two years ago, I came across an article with this image of backpacks lined up on the front square of Trinity College, Dublin. 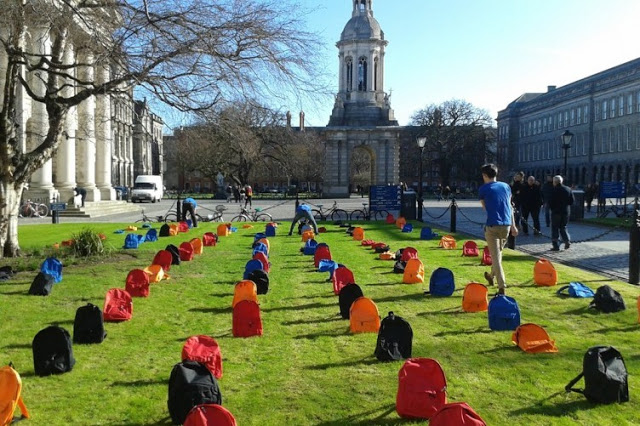 131 backpacks – one for each young Irish life lost to suicide in an average year. It’s an image that’s equally thought-provoking and heart-breaking. 131 young people that felt they had no place in this world anymore. 131 families with an empty seat at the table, an empty room, a brother, sister, son or daughter who won’t come home again. It came with a message: ‘Every one of us can play our part in changing this. Send silence packing’. No matter how scary it was, I knew I had to play my part, and start talking.

I’ve had mental health problems, mainly OCD, since childhood, but like so many others, I did nothing about it until it had completely taken over my life. When I finally went to see my GP, I was 21 and just completely stuck. I’d been too nervous to sit my exams the previous year and was repeating a second year of university. Things were just escalating. I would sit up most of the night looking at textbooks, not taking a word of it in but just too guilty to sleep. OCD rituals were taking up an excessive amount of time and classmates were beginning to notice the anxiety attacks. In some ways, I was still functioning – I was volunteering a lot and still running a bit. But I just felt stuck. I didn’t really have proper friends, with moving between three different year groups. And I couldn’t really talk to my family. As much as we get on well, they didn’t understand why I was repeating and they were embarrassed to tell others what year I was in. So I kept things quiet, all the while getting worse and resorting to self-harming in secret to try and cope. I thought I was in complete control of it until I found myself in A&E one night when it went wrong – scared, alone and incredibly embarrassed to be a medical student. I felt like an imposter, like I didn’t deserve to be on the course.

Stigma is still very real within many professions. Whilst society is thankfully becoming much more open about mental health, there is still a lot of stigma attached to mental illness among people who are (or who will be) responsible for the welfare of others. And unfortunately, because of this, far too many doctors, nurses, social workers, teachers and students are silently carrying a needlessly heavy secret every day. In the worst cases, this has contributed to people ending their lives. People are afraid to seek help because they are worried about the effect it might have on their career. They are afraid that patients and colleagues might trust them less. They are afraid about what people might think, and what their diagnosis says about them. There is a very powerful notion that a mental illness is a permanent personal flaw rather than a treatable condition, and that’s something I’ve come across quite a lot.

After a particularly bad anxiety attack in class one day, I’d had enough and made a GP appointment to ask for some help. I was nervous and shaky but the doctor couldn’t have been more supportive or more understanding. That started off a long process of appointments and assessments and waiting lists. I was diagnosed with a mixture of anxiety, depression and OCD, which came as no surprise. And I’d be sugar-coating things if I said that it was plain-sailing from there. Unfortunately that’s not the way it works. I ended up having to defer my exams again that year, which meant repeating a third time.

I remember being sent to our pastoral advisor on one occasion – I tried to explain what was going on but he just didn’t seem to get why I thought I could still do medicine. In his eyes, someone like me couldn’t and shouldn’t be a doctor. I’m one of these people that cries weirdly infrequently, but I was getting so frustrated that I started to cry in front of him. He awkwardly started reading aloud from our study guide, as though that would help, and I left feeling more alone that ever. But at this stage, I spoke to the Students’ Union who were really understanding and explained my options. I also had the support of an amazing psychologist and GP who both fought my corner and persuaded me to give the course one go. Passing second year seemed like a hurdle that others sailed through but one that I would never reach. Thanks to their help, I got there in the end.

And I started talking. It was incredibly scary to begin with, but I started writing blogs about mental health and shared them on Facebook in the hope that it might help others. Growing up, I was never a talker, so being open about something so personal still feels strange. I don’t regret it though. It changed more than I ever could have hoped it would. People know now, and being three years behind at uni is no longer such an awkward subject with classmates. I’ve found friends that I didn’t know I had. People have taken the time to read the blogs, to leave comments, send messages, invite me to things – and the kindness and compassion that classmates have shown has made more of a difference than I can explain. I have housemates and friends that can talk about my weird behaviours and joke about it while we do other things – an everyday conversation, not the huge, scary subject it can seem like. People have felt able to open up to me, and ask for advice when they’ve been struggling.

When I saw that image of the backpacks, it hit home that so many of us are dealing with things like this but yet we all feel alone. The sheer number of other medical students who have since confided in me about their own mental health has been eye-opening. It’s really encouraging to see other students start to offload that heavy weight that so many of us carry around every day.

For anyone who might be in a similar boat, the best advice I can give is to persevere with your studies if you feel that it’s right for you. When things were going badly a couple of years ago, I applied to some other courses as a back-up plan. When the offer came through the door a few months later, I felt absolutely nothing. If anything, I was disappointed that I’d got in because it meant that changing courses was a viable option. That’s how I knew that I needed to stick at medicine. I don’t want to do anything else.

Hopefully your school will be supportive. Universities in general are becoming so much more used to handling situations like this, and chances are, you’ll encounter supportive and understanding staff, so don’t be afraid to be honest with them about what’s going on. Don’t leave it until it’s got to the point where you feel like completely giving up. And on the off chance that they’re not supportive, don’t give up. Other people can help. Speak to the Students’ Union and your GP. They can help you figure out how to move forward when you just feel stuck. If you’re asked to take time out or to repeat a year, it can feel like you’ve failed. You haven’t. It’s a big decision at the time, and you might encounter all sorts of negative reactions from friends or family, but stick with it. If it helps you reach your overall goal, it’s worth it.

Being open to your classmates about what’s being going on can be really scary, but people are often so much more understanding than we think they we will be. The reaction I’ve got has been overwhelmingly positive, and that’s helped me to persevere through the more negative reactions and keep talking about the things that we’re not ‘supposed’ to share with others. I’ve been slowly learning that it’s ok to have opinions, it’s ok to have a voice, and to use it, no matter what you study or what field you hope to work in. Talking about my mental health has led to so many conversations and friendships that otherwise wouldn’t have happened. We never know how much someone else might need to hear our openness. I’ve lost count of the amount of times people have told me “I thought I was the only one who felt like this”. Talking is not easy, but you’re never as alone as you think you are. Acknowledge the elephant in the room. It won’t go away until you do. 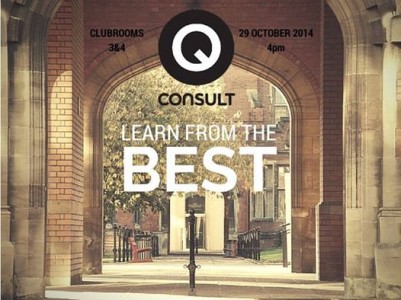 Q Consult Consultancy Workshop–  a fantastic opportunity to “learn from the BEST” What? 5 consultancy specialists from a diverse range of backgrounds will […]

Hi everyone, I’m delighted to announce who has been nominated for The Domino’s SU Awards. The awards night will showcase and celebrate […] 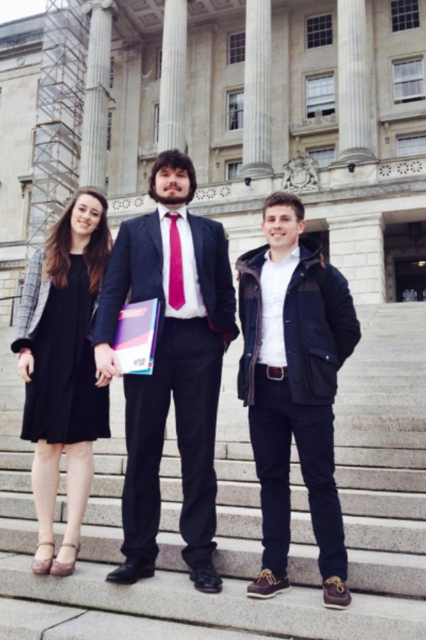 On the 14th October myself and a few other Student Officers were given the opportunity to quiz MLA’s at Stormont. The event […]