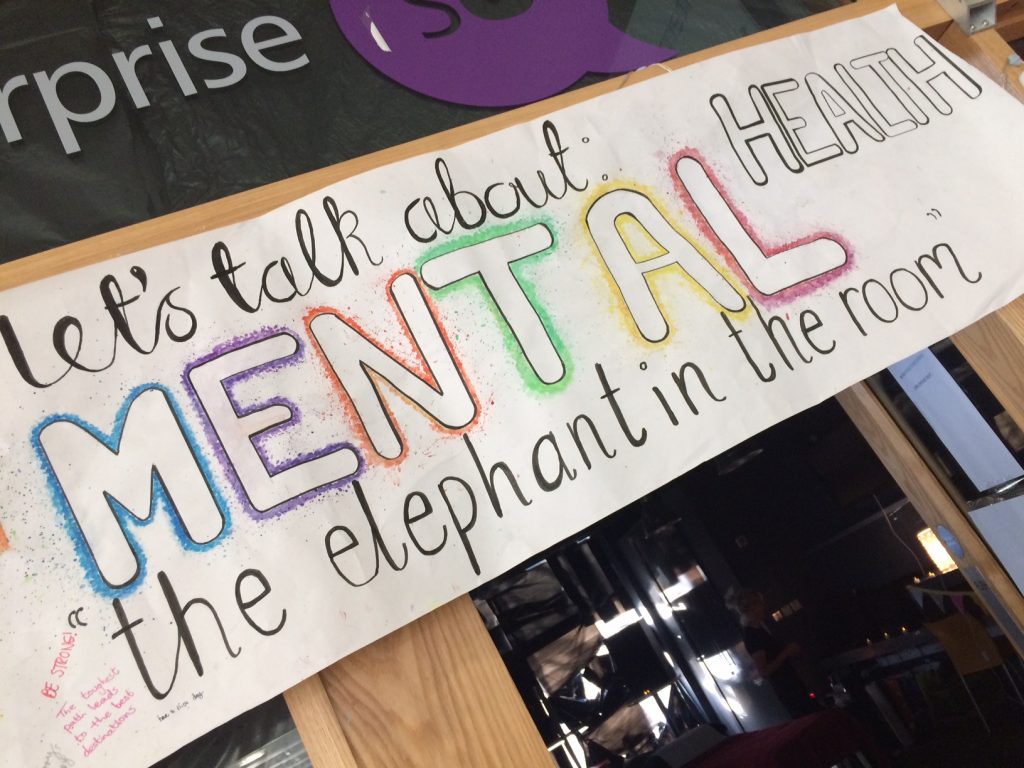 I wanted to write this blog post not only to tell my story, but to reach those out there who might be struggling with their own mental health, to reach those that might think everyone else’s lives are perfect and they couldn’t possibly know what it’s like. In actual fact it’s the people you least expect that are dealing with the same issues as you. I wanted to tell you that you aren’t alone. I wanted to tell you that you CAN do it. I wanted you to know that there are other people out there (more than you think) that are here for you and can help. I never thought in a million years that I would be sitting in an office here in the Union. I      never thought I could run and plan campaigns to try and help other students like me. I never in a million years thought that I could be an advocate for you and fight for your welfare rights. I never thought in a million years that I would talk publicly about the issues I’ve faced, but here I am.

Rewind back to my secondary school years and there is me; Hair scraped back, too much mascara, bright orange face and my collection 2000 clear lip-gloss, someone who just wanted to fit in and be liked. This is whenever the bullying started to get really bad. Just because I wasn’t like the popular girls, I felt different. I went through secondary school going to class doing what I had to and ignoring the jabs and insults thrown my way, until I got to 5th year. This is when the depression started to kick in. At the time I didn’t know what it was and I just thought I was a ‘wee emo’ and never spoke about it. As I progressed and got to 6th year, I’d buried it so deep that I’d forgot it was even there. I had some good friends and had a jolly good time and ended School on a high!

Then it was summer. The summer before university changed me forever. That summer was probably one of the worst of my life to date. It started off amazing! It was the last summer my group of friends were all hanging out together with a break from school and studying. We just enjoyed music, the good weather, cocktails and hanging out! The depression reared its head about a week after we finished our exams but, (yes you guessed it) I ignored it again. Ignoring it turned into ignoring my friends. Ignoring my friends turned into ignoring my family and ignoring the people I loved the most turned into me ignoring myself. My mind was empty. I felt nothing.

That summer I learnt what it meant to have anxiety and panic disorder. I was in the living-room watching a rom-com (as per usual) when all of a sudden my heart flew into overdrive. I seriously thought I was having a heart attack. I burst into hysterical tears and ran into my dad who was sleeping and woke him up by shouting ‘I NEED AN AMBULANCE HELP OH MY G*D DAD, I’M HAVING A HEART ATTACK, PLEASE HELP ME’. I’d read somewhere that sipping cold water helped if you were having a heart attack? So I ran to the en-suite sink sipping water, gasping for a breath, telling my dad I loved him and to tell mum that I was sorry. If you have ever had a panic attack you will know where I’m coming from and if you haven’t, trust me… It’s horrific.

After that first attack many followed and I began staying in my room for as long as I could only leaving when my Dad forced me to go to my summer job. I did everything really slowly taking a break every 15 minutes or so to have another panic attack. I was having about 20-30 a day, barely sleeping. I couldn’t ride a bus, I couldn’t cough too hard in case it caused an attack, I hated getting in the car with someone other than my dad and there was NO WAY in h*ll I was getting on a plane (me and mum were going on holiday the 1st week of September that year). I had to have the window down every time I was in the car because I thought I couldn’t breathe. I had to sip water constantly because I thought I couldn’t swallow. It had got to breaking point. I wanted to die and no one knew.

My dad throughout all of this tried to talk to me about it. Tried to make it everyday conversation but I got so angry at him anytime he tiptoed around it. Lashing out and telling him I hated him. It got worse and worse. I self-harmed, I binge ate and stopped giving a sh*t about anything. I was spiraling into something I can’t describe. I can only remember parts of. A lot of it is blurred because my mind wasn’t even thinking. It was numb. Just a swirling pool of white noise. A few months ago I was cleaning my room and found a piece of paper. A piece of paper I forgot I had even written. The title was ‘The pros and cons of killing myself’. I was in such a bad state I couldn’t even remember writing it?!

If my dad hadn’t of tried to talk to me about it. If he hadn’t of talked about his own mental health so openly and tried to make it an everyday conversation I don’t think I EVER would have said anything. I don’t even know if I would be alive. By making mental health a little less scary to talk about I felt I could speak to him. All I said was; ‘I don’t think I can do this anymore’. After I said it, the weight that was lifted from my shoulders was immense. I can’t remember what happened in-between the start of the suicidal thoughts and telling my dad but whenever I told him it was like a pair of really strong prescription sunglasses that I couldn’t take off, had disappeared. 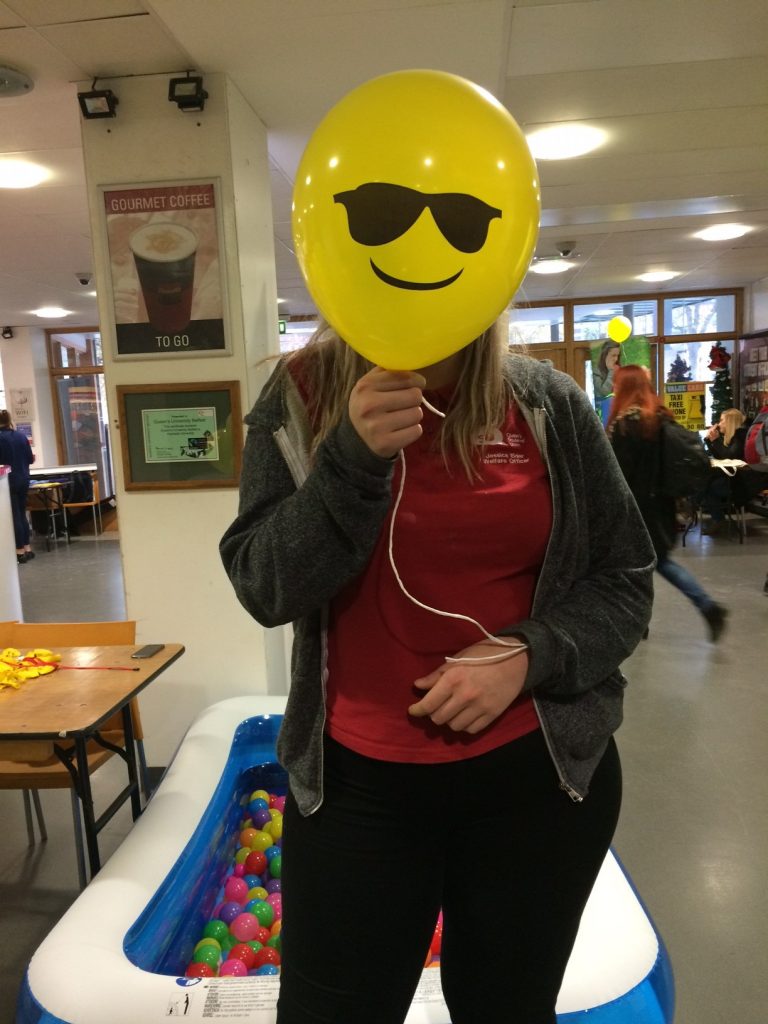 Now, I’m not saying it got all better and I started living life normally again but it was a step in the right direction. I started to get help and started developing things to help me cope. It hasn’t gone away and I don’t think I ever want it too. It’s still there, but it’s not ruining my life. It actually makes me stronger. Through talking to my circle of friends at university about mental health the stigma started to disappear and we all openly talked about our own mental health. We helped each other and shared experiences along the way. If it wasn’t for those people, I wouldn’t have carried on at university. Too many times I sat in front of my personal tutor ready to withdraw. If we all talked about it like it wasn’t something so taboo and scary, it could really help someone like 18 year old me. It could help someone like that person in your class who’s a little anxious and nervous. It could help that chatty confident person who is hurting on the inside. It could help you.

If you take anything away from this blog let it be that there are people just like you, living their lives in silence that just need to talk. It’s time for us all to #ThinkoutLoud

If you are struggling with your mental health and would like to talk to someone you can contact the Student Counselling Service: Carecall on 0800 0220016