The words you use can really impact others. We use words and phrases every day without thinking about their true meaning and the effect they can have on others.

How many times have you said phrases such as ‘man up’ or ‘don’t be a retard’ or ‘my facebook was fraped’ without even thinking about what you are actually saying…we know that these are common everyday phrases that everyone uses but does that really make it ok to use them?

I want to create a more inclusive environment for our students and I’m asking everyone (including myself!) to ‘Wash Your Mouth Out’ and really think about the power of the words you choose to use and how they can both offend and continue to reinforce society’s stereotypes.

Here’s some examples of the types of words and phrases I am talking about – I for one know I have used some of them in the past but I plan to make a conscious effort to think before I speak to help eradicate this type of language.

Frape around 1 in 7 students have experienced serious sexual assault. Violating someone’s Facebook privacy is totally unacceptable, but so is belittling the experience of sexual assault and rape victims.

Slut no one should be ashamed of having sex, neither should anyone make them feel that way. When 1 in 3 sexual assault survivors believe they won’t be believed if they report crimes against them how would such a word affect them?

Feminazi disagreeing with someone politically does not allow you to equate them to the systematic murder of 7 million during WWII. Rational debate is healthy

“Don’t be a pussy” Equating someone’s genitalia with weakness is just weird. We’re pretty sure that your testicles aren’t all that robust. Disclaimer: we’d advice against testing that theory out.

“Man up!” Reinforcing gender stereotypes and enforcing your view of what a ‘man’ should be is sexist, inferring women are inferior, and often homophobic.

“That’s so gay” Using someone’s sexuality to denote something that is unacceptable feeds into the homophobic culture of society. LGB+ students are more likely to consider dropping out than heterosexual students, and are much more likely to feel unsafe on campus – let’s help change that!

Queer derogatory slang that describes someone who does not conform to normative ideas of gender or sexuality. Reclaimed by the LGBT+ community in pride. Loud & queer! (rainbow)

“Which do you prefer?”/”So you’re half gay?” Bisexuality often gets forgotten or ‘erased’, yet the B in LGB makes up just over 50% of that community. Bisexuality is an identity that should be respected, understood, and not belittled.

Tranny for Trans students issues of healthcare and personal safety are very prevalent, while they also face a daily struggle to be recognised in a way that wish to be. Derogatory language like ‘tranny’ are words they hear repeatedly. Imagine it was you.

“So what’s your real name?” My real name is the one I just told you. Non-binary people often get asked what their ‘real’ name is. This is demeaning of their individuality.

Pronouns such as “he”, “she” or “they”. If someone asks to be known or addressed by a specific pronoun then you should respect that. How would you like to be referred to as “it”? Clue: you wouldn’t. 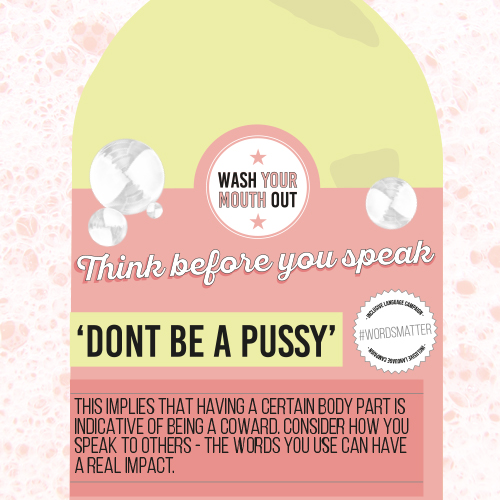 Gypsy Travellers from any ethnic background or country deserve to be referred to in a respectful way. They’re human too, and stereotyping the characteristics of entire ethnic groups is never on.

“So, where are you really from?” I just told you… I’m from Belfast. Just because a person appears to be from an ethnic minority, doesn’t mean they aren’t as much a part of your local community as you are.

“That’s so…” Irrational? You wanted to say irrational, right? Instead you chose retarded or spastic. If you checked the dictionary you’d know that one means to delay or decelerate, and the other is a medical term. We’ll leave it up to you to find out which is which! But neither means uncool, absurd etc

“You don’t look sick, get over it!” Mental illness is a hidden disability that will affect 1 in 4 of us, so at some point you may face issues of anxiety or depression too. Bear that in mind next time you question whether someone is actually feeling unwell or not.

“You don’t look disabled.” What does a disabled person look like? Disability can be hidden or visible. If someone informs you they are disabled, it isn’t your right to question that. They don’t need to provide you with a doctor’s note to validate your sense of what they should look or act like.

“Think positive… it’s all in your head!” You aren’t trying to be unhelpful, but mental illness isn’t something people just snap out of. Instead ask how they are, or if there is something you can do to help them. Now that’s positive!

Think we’ve gone “PC mad”? The ‘Wash Your Mouth Out’ campaign isn’t supposed to be negative, rather it’s supposed to make you think in a positive way about others around you. We’ve all had loved ones referred to in a derogatory or demeaning way, so why should it be ok for you to treat someone else the same way?