Some Queen’s students hear the Christmas adverts during December singing ‘It’s the most wonderful time of the year’ and think to themselves – no way, that’ll come in three months’ time in March.

While Paddy’s Day can be fantastic – areas like the Holylands have gained a bit of a bad rep around Paddy’s Day and this has resulted in people being disciplined by Belfast City Council, the PSNI and the University.

In my first couple of months as Student Officer, Community eight students were considered for suspension because of their behaviour on St. Patrick’s Day. Suspended for a year from your course… I’ve been to a fair few parties over the years and I can tell you that none of them have been worth that! 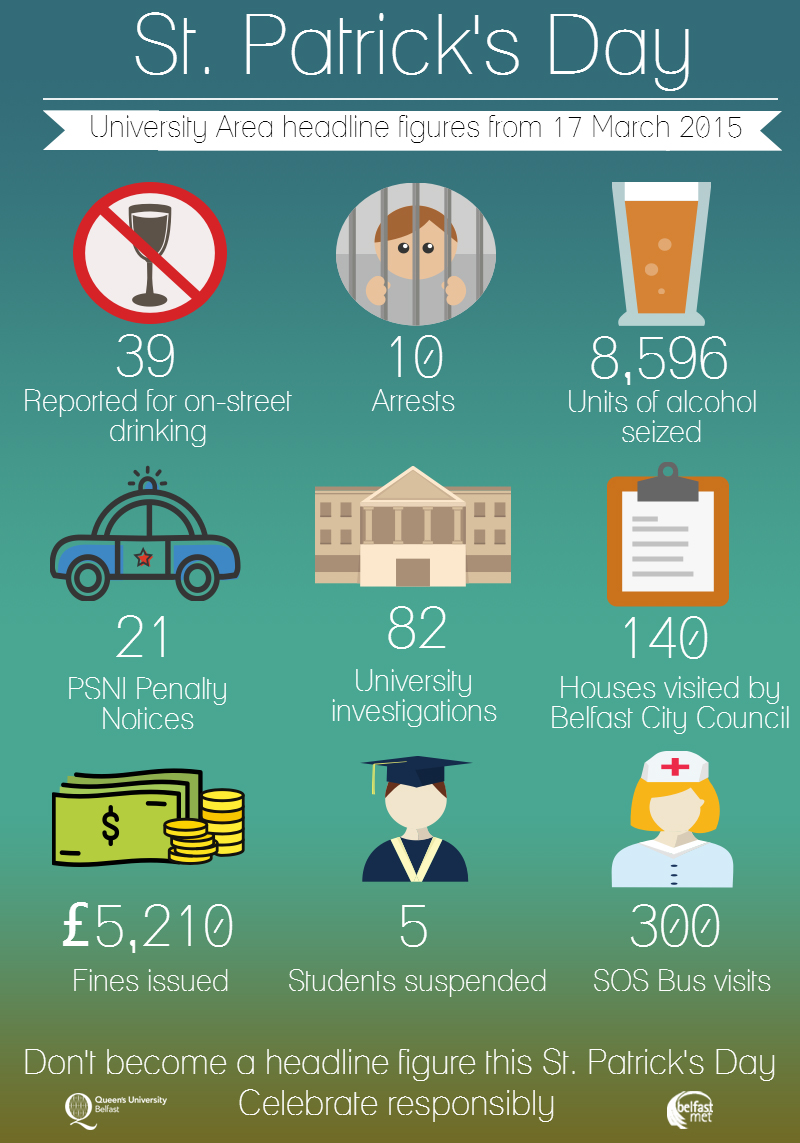 So I’ve a few words of advice to help you avoid being one of the St Paddy’s day Statistics;

1) Keep the music down– otherwise you’ll end up fined and disciplined by both the Council and the University (which will stay on your record til graduation).

2) Mind your mates – make sure everyone is safe and sound. If someone seems a bit worse for wear, get them some water and food or better yet put them to bed.

3) The PSNI will be doing a large scale anti-drink driving campaign around the University area on the 18th March. Please make sure you have given enough time between stopping drinking and driving your car. In general, alcohol is removed from the blood at the rate of about one unit an hour.

4) Strangers from outside areas come into places like the Holylands looking for a party. This has been one of the biggest problems over the past few years and many students have had their house seriously damaged. Don’t let people into your house that you don’t know.

5)  Look after yourself. Make sure you’re fed and watered and try not to put yourself in potentially dangerous situations.

6)  The Students’ Union is here to represent you; if the worst happens and you get yourself in trouble it is incredibly important that you call in to speak to us (our office is on the second floor of the Students’ Union).

This year for the first time in years the Students’ Union will be open on Paddy’s Day. Why not come over and join us.

Enjoy yourself (responsibly of course!).

Hello everyone, My name is Niall Mc Kenna and I am proud and delighted to serve as your Student Officer Clubs and […]

Hi everyone, I’m delighted to announce who has been nominated for The Domino’s SU Awards. The awards night will showcase and celebrate […]

We had a very successful National Voter Registration Day getting roughly 160 students registered on the day. I organised stalls at […]