We have been recently hearing about microbeads and the microbead ban on the news. But you may still wonder “what is a microbead?” Microbeads are defined as manufactured solid plastic particles (polyethylene, polypropylene or polystyrene) of less than five millimeters in their largest dimension. They can be found in exfoliating beauty products and toothpastes, causing them to end in the sewage and passing unfiltered due to their micro size, making it to rivers, canals and the ocean. 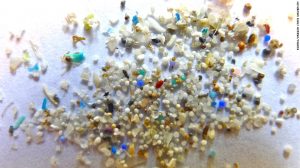 According to a government report1 a single shower can result in 100,000 plastic particles entering the sewage system and 680 tonnes of plastic microbeads are used in the UK every year. Microbeads and more generally microplastics are a relatively new “impact” on aquatic environment and research is still on its early days , however there is scope for significant impacts on freshwater and marine environments.

Dr Dannielle Green visited Queen’s University Marine Laboratory in 2014 to study the effects of microplastic on benthic communities and nutrient cycling, finding significant negative effects of plastic on the biological activity of an ecosystem engineer2 and on the oyster-associated community structure3 .I was lucky to have one day helping Dr Green on her most recent visit to the Marine Laboratory (August 2016) with some of her fieldwork monitoring microplastics in our waters and having some interesting conversations on the subject. Looking forward to see te result of the work and encouraging who is interested in the subject to watch her space.

While the government is planning to introduce a ban on the microbeads in cosmetics4, there is plenty that can be done in the meantime:

–       check “ingredients” on beauty products and look for natural exfoliants

–       beatthemicrobead.org has extensive product lists for many countries including UK and Ireland