Picture this,  you are sitting out in a beer garden (probably in the Parlour bar) on a beautiful sunny day enjoying a refreshing pint of cider, or two, after a hard day’s work.  It’s a nice picture isn’t it?, now have you ever wondered  what is behind the great taste of the beverage you just pictured yourself drinking, No? Well if I still have your attention you are about to get a very quick crash course into the microbiology behind one of Northern Ireland’s finest products, Armagh cider.

The production of artisan ciders has become a rapidly expanding part of the fermented products sector in NI; five out of the current seven dedicated cider breweries have been founded since 2009. The majority of cider-makers (irrespective of scale, in NI and beyond) make cider from apple concentrate which is made from blends of apples and is bought in from commercial suppliers. However, cider produced by Armagh Cider Company (a four-generation family enterprise, first founded as an apple grower in 1898, and the company I am working with for my PhD) is made only using apples grown on the company’s farm, and only using fresh juice.

A major component of Armagh Cider Company’s ciders (typically 50% by volume) is the traditional Armagh Bramley apple, which is in terms of both taste and breeding distinct from English Bramley apples (English Bramleys are not used in cider making by any producer). The Armagh Bramley was awarded Protected Geographical Indication (PGI) status from the EU in (2012).  This means that Armagh is the only place in the world where this type of apple is found!  Now this is a very important feature of Armagh ciders as it means that there is a unique microbial community associated with Armagh Bramleys. 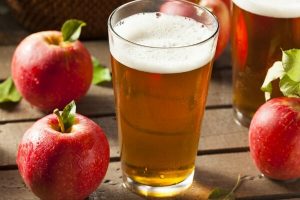 So there you have it, the next time you are sipping a refreshing cider on a beautiful sunny day you will know that it was a handful of bacteria and fungi fighting for survival that have provided you with such a great tasting beverage… now isn’t that food for thought.