Puppets of Parasites: Parasites at the Walls 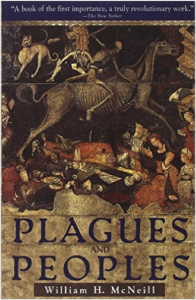 Much of the following is a concise review of some of the work in William H. McNeill’s “Plagues and Peoples” and I advise anyone interested to go ahead and read this fascinating piece of literature.

I) March of the Pilgrims

From the moment our ancestors left their arboreal lifestyle, journeyed across the savannah and migrated out of the Cradle of Africa into the more northern reaches of Eurasia, they escaped from a plethora of parasitic nemeses that had come to afflict them in the tropics.

Let’s swiftly time-travel forward a few millennia and into Northern China, to the banks of the Yellow River. It’s 150 BC and rice and millet farmers have been incredibly successful in taming this great river and transforming the region for their farming needs. Their food production is so good that the peasant farmers produce a greater harvest than they require, allowing for a positive net population growth to be maintained. This surplus population spreads to the South, and by the end of the Han Dynasty it reaches the more tropical climes of the Yangtze River. Here, the river flows less chaotically and a milder climate exists, allowing for longer growing seasons. As well as more abundant rainfall, the South appears to be suited to making farming more stable and efficient whilst removing drought risks that threaten the land in the North. You’d therefore be forgiven for expecting the population on the banks of the Yangtze to be just as prosperous, if not more prosperous than their Northern kin. However, this climate was not only suited to agricultural practices, it was also suited to an invisible hazard, tropical parasites.

Whatever they were, these tropical parasites and their vectors that confronted migrating pilgrims could not persist in Northern China due to the severe winters that brought on prolonged cold and dry periods. In the South, on the other hand, they could thrive. And thrive they did, as it would take a further six centuries before the Yangtze Valley was truly settled. Both unexposed Northern folk and the organisms that would come to parasitize them in the South lacked the relevant biological adaptations necessary to facilitate co-existence. Thus, the parasites were highly virulent to their human host and people trying to farm in the Yangtze Valley region would be incapacitated and struck down, as alluded to by a record of shorter lifespans compared to those in the North. Some of the afflictions that would affect these peoples of the South were likely the mosquito-borne diseases of malaria and dengue fever, as well as helminth diseases such as schistosomiasis. It would go on to take a massive number of people to repeatedly be exposed to these parasites before any adaptation (biological or otherwise) would occur that would allow for the South to be truly settled and fully exploited for agricultural gains, in turn allowing this ancient Chinese civilization to expand.

Compared to the Yangtze Valley, the Ganges Valley in modern day India is warmer and wetter still. It follows, then, that the Ganges Valley (and much of the Indian subcontinent as a whole) is incredibly suited to a great number of parasite species. The potential geopolitical consequences of this great parasitism within tropical India are profound, as it is believed that it may have been significant in the rise of the caste system that operated within Indian society. Whenever the Aryan peoples of the milder Northwest would try to penetrate the tropical regions to the South and East, they would be confronted by a great disease gradient and the tropical parasites that lay in wait. Similarly, people living in tropical regions (who tended to live in smaller “self-contained” communities) were vulnerable to the “civilized diseases” of urban populations, and as a result an “epidemiological standoff” was incurred. This resulted in the development of distinct cultures and semi-autonomous societies living within a great Hindu confederation.

An upshot to adapting to life within the tropical confines of the Ganges Valley was that this opened up doors to other similarly tropical and parasite-laden environments across South-East Asia, including the river valleys of the Brahmaputra, the Mekong and the Salween. And so this happened and a “Greater India” was born, spreading as far as Indonesia. Despite this upshot, many of those inhabiting these areas must have been victim to heavy parasite burdens, significantly reducing their individual vitality and ability to carry out physical labour. Unlike those of ancient Chinese civilization occupying the Yellow River Valley and beyond, the ability of these parasitized peoples to produce surplus food was reduced. The abundant yield of the ancient Chinese farmers allowed them to pay their landowners and Emperor some of their harvest as rent and taxes. This supported the birth of the ideals of Confucianism which, simply put, implemented an ethic that restrained an overuse of power by an imperial elite on the peasantry, essentially ensuring farmers were not overexploited or overtaxed.

Conversely, as a result of their heavy parasite burdens, the people of the Ganges River Valley (and others in similar environments) lived within a very narrow margin of the food they could produce and the amount of food they needed to survive, and thus the Confucian ideals of ancient China could not be supported within the lands of “Greater India”. That said the two great belief systems of this India, Buddhism and Hinduism, did support a worldview parallel to that of Confucianism. But unlike Confucianism, they did so almost apolitically. Buddhism and Hinduism instilled an ethic that minimized materialism, rejected the idea of power and wealth and offered transcendence from this world. This ideal offered an escape from the suffering of existence in a world riddled with parasites that not only made you sick but also kept you poor. This is striking, as it suggests that whole belief systems that still exist in the modern era we live in today could have been heavily influenced by the epidemiological factors of parasites.

It’s not only cultural beliefs that were perhaps influenced by parasites. Wars and battles appear to have been won and lost by the hand of epidemiology. Up until the end of the 19th century, more soldiers are believed to have died from disease than wounds during war. There exist many examples, from ancient times right up to the modern era, of war being influenced by agents of disease. In 326 BC, Alexander the Great’s attempted invasion of the Indian subcontinent was met with mutiny by his troops. It seems coincidental that this revolt is reported to have occurred in the Ganges River Valley. Indeed, the Indian subcontinent appears to have been almost impenetrable on a number of occasions. Closer to the modern day, European and American armies suffered great losses in the Far East and South-East Asia during WWII, as a result of the tropical diseases they encountered there. It’s not only Asia where 20th century warfare has been manipulated by parasites. The European trenches of WWI, with warm-blooded mammals living in very close confines, proved a brilliantly moist environment for the proliferation of parasites and pathogens – This impacted on the health of whole battalions, which surely in turn affected the outcome of battles.

Perhaps one of the most famous examples of parasites influencing the result of war and the expansion of one civilization at the expense of another occurred in the New World, following the Spanish invasion of the Americas in 1492. Without knowing, the Spanish brought with them infectious agents, notably smallpox and flu. But more importantly, they brought them to an immune-naïve native population – the result was one of enormous tragedy; millions of people died and whole empires collapsed. The Spanish also brought with them a Christian God, which they sought to convert the indigenous peoples into worshipping. After seeing so many of their fellow natives fall victim to the ravages of these “new” diseases while the invaders remained unaffected, the remaining native people accepted a divine intervention by the God of the Spanish and suitably converted. Thus, this is yet another example of a belief system that was perhaps heavily influenced by infectious agents and that still persists to this day throughout the Americas. 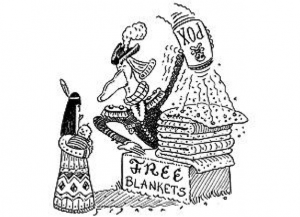 It appears that in the absence of the microscope much of the course of human history and civilization has been steered by invisible agents. This can be seen in the unconscious desire of early humans to migrate from the tropics of Africa, in the development of agricultural practices, in the adoption of particular belief systems, in trade and communication, in the ability of a civilization to expand its borders and in the outcomes of war. Thus, the question is there to be asked, are we the puppets of parasites?