Posted on 8th July 2016 | By Camilla Bertolini | No comments

The rapid sequel (cough) in the ‘Irish Inspiration’ series is here. The first edition detailed the accomplished, yet widely unrecognised heroics of Tom Crean, the Antarctic explorer (https://blogs.qub.ac.uk/qubio/2016/02/19/irish-inspiration-thomas-crean-antarctic-explorer/). However, as ‘Irish’ in this context should read, ‘Island of Ireland’, I go from humble Kerryman to Belfast born William Thomson, aka, Lord Kelvin.

William Thomson was born in College Square East in 1824, not far from where the famous Europa Hotel stands today in Belfast city centre. Something of a child prodigy in mathematics, Thomson began classes at the age of 10 at Glasgow University. A measly six years later, he published his first scientific paper and his second and third quickly followed. It was clear from the start Thomson was to become a leading academic in his field, and a continued university education at Cambridge facilitated his career progress. Although, despite his singular pursuit of academic progress, Thomson was a keen sportsman and musician at Cambridge and one interesting anecdote tells of his father’s shock when it became apparent his still very young son spent all of his allowance on a sail boat.

Despite this distraction, of which boats are the most fruitful kind, Thomson’s research really took off from 1845 onwards. In just a few years he made substantial developments in the subjects of electric induction and electrostatics. His proliferation in these subjects was so quick in fact that on returning to Scotland after a short spell in Paris, he was unanimously appointed to the chair of natural philosophy and became a well renowned Professor at the young age of 22.

For some, his important work in the formulation of the first and second laws of thermodynamics is Thomson’s most renowned achievement. However, in close competition for this accolade is his contributions to the design and instalment of the first transatlantic telegraph cable in 1866, for which he was awarded a Knighthood. This too has Irish significance as the cable was landed on the Island of Valentia, off the coast of Co. Kerry where Thomson often spent time supervising the first communications via the 2,000 mile long underwater cable.

Thomson was ennobled in 1892 in recognition of his achievements in thermodynamics, (and for his opposition to Irish Home Rule – what would he think of Brexit I wonder) and subsequently became known as Lord Kelvin. The title refers to the River Kelvin, which ran close by his laboratory at the University of Glasgow. It is worth noting however, that even the brilliant Lord Kelvin himself sometimes got it wrong. Here are a few of his predictions on the usefulness of radio, planes and x-rays…

“Radio has no future… Heavier-than-air flying machines are impossible… X-rays will prove to be a hoax.” — William Thomson, Lord Kelvin, British scientist, 1899.

Safe to say, despite these anomalies, the right honourable Lord Kelvin was nothing short of a genius, and by the end of his life in 1907, he had become an international celebrity, widely respected and honoured all over the world. His continued contribution and dedication to science from such an early age is truly inspiring, and it is fitting Belfast pays tribute to his achievements in the form of a statue located in the Botanic Gardens close-by to Queen’s University. A word of warning however, don’t dwell too long on the timeline of his prolific career, if I was half as scientifically productive as Kelvin, when he was just half my age, I would be approaching a Professorship by now…isn’t that a thought. 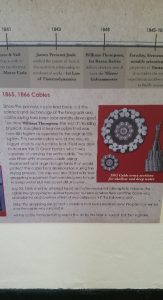