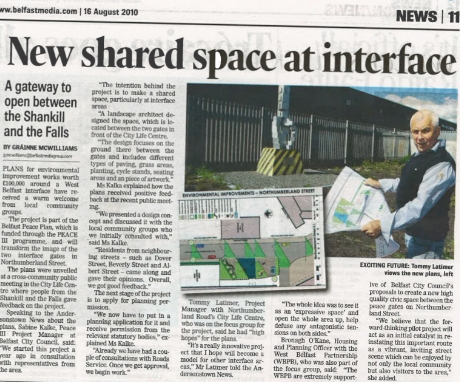 The Northumberland Street project evolved out of Street Society, a one week research project, run for 1st year MArch and BSc Students, that invited external organisations to set project briefs for architecture students, to be completed in one week. (http://streetsociety.ning.com/). The project described in a press release was one of two projects given by Belfast City Council to the students – involving a rethink of one of Belfast’s key interface zones, Northumberland Street that runs between the Falls Road and the Shankhill.
Students came up with public realm sketch designs which were very well received by community representatives at the end of the week. Belfast City Council decided to pursue the design and appointed an Architect/Landscape practice to develop, detail and build the project. The students continue to be involved, by documenting and disseminating the process to the surrounding communities and planning a launch event when the new public space is complete (target date December 2010).