“Over the last decade the Internet has grown as a source of sexual socialisation in the US” (Subrahmanyam and Smahel 2011), with “young people in the US using social media to express their own sexuality among peers” (Manago and et a l 2008). This sexual socialisation of young people due to technological developments is undoubtedly reflected in Gary Shteyngart’s vision of a near-future America in his Super Sad True Love Story.

In Shteyngart’s imagined world, hyper sexuality is intrinsically linked to society; with pornography being considered a mainstream source of entertainment for all ages, “Remember those porns we used to watch when we were in kinder garden? With the old man who molests teens on the beach. What was it called? Old Man Spunkers or something?” (224).

The effects of this exposure to sexual images in childhood is elucidated by Eunice and her friend’s discussion of their peers’ sexual activities,

“Guess where she ended up by the end of the party? In the bathtub getting ass-reamed and face-pissed by Pat Alvarez and three of his friends who taped everything and then put it on GlobalTeens the next day. GUESS how high her ratings went up? Personality 764 and Fuckability 800+” (27).

Whilst the degrading acts referred to, ‘ass-reamed’ and ‘face-pissed’, are (thankfully!) alien concepts to us, it is not outside the realms of possibility in today’s society, with Wright commenting “because the majority of today’s most popular pornography includes verbal and physical aggression, the targets of this behaviour is bound to be learned is bound to be learned and acted out in sexual relationships” (23).

Another example of the saturation of sexuality in Shteyngart’s society is through the female characters’ fashion choices, with the clothing store “JuicyPussy” featuring “nippleless bras”, ‘TotalSurrender panties’ which ‘snap right off when you press a button on the crotch’ (109) and “Onionskin jeans” which cling “transparently to [the women’s] legs and plump, pink bottoms” revealing their “shaven secret” (86). Interestingly, there is no male equivalent to these pornographic garments in the novel, which leads one to consider the relationship between the objectification of women in both Shteynart’s and today’s digital world. 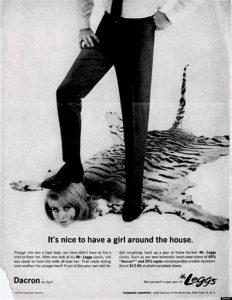 Impress your tiger-rug wife with Mr. Leggs- from Adweek

Through the online interaction between Eunice and her friend who referred to only as “GRILLBITCH”, the internalisation of this objectification is fully realised; with Eunice’s friend seeking comfort in the fact that her boyfriend told her she “looked slutty” and that her “fuckability was 800+” (42). The two young women refer to each other as “cum-slut” and “cum-monkey” (114), which are seen to be terms of endearment. GRILLBITCH’s relationship advice to Eunice is equally as overtly sexual; “Treat him like shit during the first day, let him fuck you HARD the first night… He’ll fall for you pronto, especially after you let him plunder your MAGIC PUSSY!!!” (26). In another correspondence between the women, GRILLBITCH describes her response to her boyfriend cheating on her;

“So I went on this site called ‘D-Base’ where they can digitize you like covered in shit or getting fucked by four guys at once…Anyway he came over to my parents house and fucked me in the ass, which is a good sign because we haven’t done that in a while, and its been three hours since hes responded to that bitch on Teens” (120).

Through these utterances, we understand that the females place their value in terms of their sexual function to their male counterparts, due to the saturation of sexual images in their digital world.

A major aspect of Shteyngart’s world which sexualises women is the practice of “FACING”, described by Lenny’s friend Vishnu as a “way to judge people and let them judge you. You look at a girl, the EmotePad picks up any change in your blood pressure. That tells her how much you want to do her” (86).  Becoming a futuristic male gaze of sorts, FACING reveals to the man the woman’s “fuckability”, “personality” and “anal/oral/vaginal preference” (86). Even more sinisterly, the practice also reveals any sexual trauma the women have experienced, “Walking past Annie, I clicked on her Child Abuse Multimedia, letting the sound of her screaming vibrate my eardrums as a pixelated disemobided hand hovered above an Image of her naked body and the screaming segued into what sounded like a hundred monks chanting the mantra ‘he touched me here, he touched me here” (90). Again, one wonders if this imagined technological advancement is totally inconceivable in our current society, with the rise of appearance-based dating apps such as Tinder being already a reality. 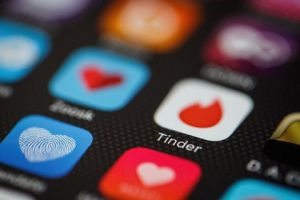 Image depicting the dating app ‘Tinder’, from The Esquire

Eunice’s poor self-image “I know a part of him must be disgusted by my fat, fat body” (72), is at odds with the other characters’ sexual attraction to her, “a small Korean…who vaguely resembled a very young Asian Audrey Hepburn” (14), revealing how the increasing sexualisation of women, due to practices such as FACING, distorts their vision of their own bodies. Once again, this can be related in our own society with Manago viewing social networking sites to act as a “socialisation medium for three main features of objectified body consciousness: internalisation of culturally dominant ideals of attractiveness, body surveillance and valuations of the self based on appearance” (2). 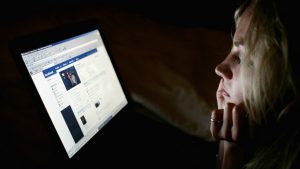 From The Week UK

Shteyngart depicts a world in which sex, and the sexualisation of women, is deeply rooted in society through his depiction of clothing and technological devices which objectify his female characters. At times amusing, and at all times unnerving, these practices are not so far removed from our current society that we may consider the novel to be not so much a dystopian imagining, but a well needed warning.

7 thoughts on “Sex, Pornography and the Objectification of Women in the Digital Age: Gary Shteyngart’s “Super Sad True Love Story””