In her 1992 book African Novels and the Question of Orality, Eileen Julien coined the term ‘ornamentalism’ to define the tendency of anglophone African novelists to exaggerate aspects of their cultural identity, as a means of establishing a prominent cultural divide from their Western readers. Brenda Cooper helpfully elaborates that ornamentalism “results from the pressure on African novelists to ‘authenticate’ their writing as genuinely African by dressing up their European structures of thought in the garb of African oral traditions, national languages, and folklore” (12). While Julien and Cooper theorize in the context of postcolonial African fiction, I do believe that they raise an interesting point – one that might affect our understanding of all foreign fiction.

Of course, Natsuo Kirino is a Japanese crime novelist, and her 1997 novel Out is undeniably Japanese in timbre. Written in Japanese (translated into English only in 2004) Out is Kirino’s first novel to be translated into the English language, and its gory plot unfolds in the heart of Tokyo. I am concerned, however, with the extent to which Kirino belabours the ‘Japanese-ness’ of her novel. Anticipating the international success of her novel, is it possible that Kirino emphasised (over-emphasised?) aspects of Japanese life and culture that would have otherwise been left unsaid if aimed at a solely Japanese readership?

An initial reading of Out suggests that, yes, there is a blatantly obvious sense of ‘Japanese-ness’. To Western readers, there seems to be an abundance of untranslated Japanese names; from the first page alone, Masaka Katori arriving off the Shin-Oume Expressway to a boxed-lunch factory in the Masashi-Murayama district leaves little doubt about the novel’s situation.Indeed, the nucleus of the novel, around which the entire plotline orbits, is a boxed-lunch factory. As Nakanishi has identified, the “bento or boxed lunch is a staple of Japanese life”, while the fact that the novel’s principle characters are factory workers ensure that “Out is saturated with the atmosphere of Japanese factory life” (von Hurter).  As the plot unravels and readers are plunged into a world of yen, yakuza, and rice for breakfast, Western readers are left feeling vaguely distanced and disorientated by the foreignness of their reading experience.

And yet, I am unconvinced that this was Kirino’s intention. By scrutinising universal issues such as female subordination, capitalism, violence, human psychology and crime, Kirino broadens her thematic focus away from just Japan, far across international borders. “While capturing the essence of contemporary life in Japan,” Davis argues, “she captures the essence of life in the contemporary industrial world, particularly for women”. While Out is firmly rooted in Tokyo, couldn’t this exact plotline have been executed just as effectively in New York, London, even Belfast? In fact, is the Tokyo represented by Kirino even the Tokyo a Western readership would immediately identify anyway? Seaman has suggested that Kirino’s city does not resemble “the standard landscape of gleaming postmodern architecture, teeming with banks and department stores and decorated with neon signs advertising world famous brand names” (201). Rather, the novel predominantly occupies the workspace and the domestic space – universally recognisable situations. In this, coupled with the fact that “Out presents a land and a people far removed from popular imaginings of a mysterious East of geishas and cherry trees” (Nakanishi), Kirino is breaking down cultural stereotypes of Japan through her novel.

I am led to believe, then, that Kirino did not fall victim to Julien’s ‘ornamentalism’ when composing “Out”. And yet, there appears to be a thread of ‘ornamentalism’ woven into Western criticism of this novel that begs attention; it seems that Western reviewers and critics are obsessed with reading a ‘Japaneseness’ into “Out” that simply isn’t there. We need only look at the titles of such writing to expose this: Stephen Poole’s review in The Guardian is (somewhat inappropriately) titled “Murder sushi wrote”, while Joan Smith’s in The Independent is named “What’s in a Japanese lunch box? Revolt and revenge”. Shockingly, von Hurter asserts in his review that “[f]amiliarity with sushi knives is useful when dismembering a body to be disposed of”. Even if we ignore his error (Masako’s tools of choice being saws and scalpels), von Hurter’s review unveils a deep-seated insistence on over-emphasising cultural significance in the analysis of a text. It seems that this spills over into the practical realm of marketing, also. The Japanese edition of “Out” features an ominous, coffin-like object, suitably foretelling Kirino’s murderous plotline. Meanwhile, various Western editions consistently exhibit nothing more than a close-up image of a Japanese woman’s face. 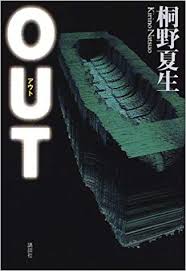 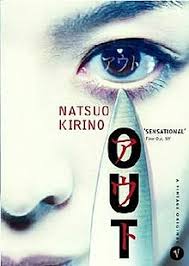 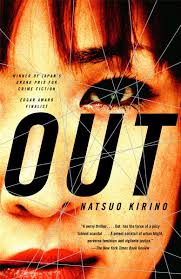 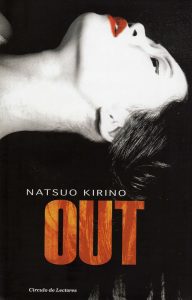 What we see here, then, is a Western fascination with the foreign other. It is the ‘foreignness’ of a text like “Out” that captures the attention of a Western audience, regardless of whether the writer intends it to be or not. Indeed, I think this is something Kirino addresses in “Out” through the strange relationship between Satake and Anna. Satake’s feelings for Anna fail to progress beyond mere infatuation; he calls her a “beautiful dreamy toy” (50), and consistently recounts superficial details of how she looks. In the scene at the swimming pool, for example, “he studied her body as she ran toward him” (226), and fixatedly details his findings. However, he does not want to pursue physical relations with her, nor does he enjoy her company on a platonic level. He is simply obsessed with observing her. This is of particular significance when we remember that Anna herself is not Japanese; she is from Shanghai. And thus, Satake is guilty of fetishising the exotic other – of detachedly engaging with her for the sake of superficial scrutiny. There is something in this infatuation that is reflective of Western obsession with the foreign. Our fascination with the novel’s ‘Japaneseness’ mimics Satake’s infatuation with the Chinese Anna, and by extension “almost thirty Chinese hostesses” he also employs as prostitutes (42).

11 thoughts on “Ornamentalism and the Japanese Crime Novel”