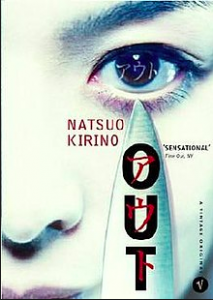 Natsuo Kirino’s dark and eerie novel Out is set in Tokyo, a global city to focus on four women who work the graveyard shift in a factory which makes boxed lunches for the commuters travelling into the centre of the city to work. All of these women are trapped working in the factory due to financial necessity. Masako has been forced out of a financial institution because she asked for a pay rise. Yoshie’s husband has died, leaving her to look after her grandson and elderly mother-in-law. Kuniko is trapped in a cycle of working to pay off the debt she has accumulated by spending money on expensive things. Yayoi is working to keep her family afloat because of her husband’s philandering and gambling. Therefore, as suggested in the introduction of Globalization and the State in Contemporary Crime Fiction, Kirino concentrates on people who are “on the losing end of global neoliberalism” (11).

Neoliberalism as suggested, by an article in the Guardian is a reductive economic idea that assumes that all human activity is a form of “economic calculation” and as a result “strips away the things which make us human”. The space of the factory is one in which individuality is stripped away through dress, or “white uniforms” (5). Through the contrast of the stark, white uniforms and the “mulitcoloured street clothes” (7) which the workers were wearing, and the repeated use of the collective pronoun “they”, Kirino depicts the factory as a place where individuality is erased. Therefore, from the outset of the novel, the factory is presented as a microcosm of neoliberal society, reducing human workers to an indivisible mass of “bug-like” (7) creatures.

Therefore, Kirino introduces a crucial theme within the novel, capitalist control over the individual, which is taken to greater extremes as the factory is described in greater detail, “they had to take turns going to the bathroom […] You had to announce that you wanted to go and then wait your turn, which sometimes took as long as two hours in coming” (11). The natural bodily functions of the workers are halted so as material production isn’t impacted. The factory then, is a space in which the processes which are required to produce commodities overrule bodily processes, trapping the women in place “from midnight until five-thirty […] at the conveyor belt” (1).

Similarly, Kuniko’s character is representative of the larger trap or cycle within a neoliberal, capitalist city, conspicuous consumption which is the idea that “expenditure on or consumption of luxuries on a lavish scale […] enhance[s] one’s prestige.”. Breu notes that the, “emergence of the city centre as a space of luxury and consumption” means that there is a stark divide, “between economic winners and losers.”. The author’s conflation of the factory and the consumerist hub of the department store, “crowded rows of sturdy hangers, like those at a department store sale.” (7), further emphasises how workers are trapped in a neoliberal environment by pervading ideas of economic worth and societal prestige. Kuniko’s car and her “designer accessories, and her clothes [which are] obviously expensive” (2) are attempts to prove her value within a system which is driven by money. However, she is deeply in debt and must come to work in the factory in order to pay off that debt and so the cycle continues.

For these women, the global city is not place of opportunity or progression, as factory workers they are doing repetitive work which allows them to make just enough money to survive on. Even in the city, working in a credit and loan company Masako’s status as an (aging) woman, meant that, “No matter how hard she tried, or how well she did her job, she played no more than a supporting role” (202). After asking for her pay to be raised in line with what her male co-workers were being paid, she is harassed and chastised until she is forced to leave and enter the part-time workforce. Masako hits what the Japan Times calls the, “glass ceiling [that] women continue to hit in their careers.”. Therefore, Kirino’s portrayal of the workplace in general within the novel challenges notions that neoliberalism is progressive.

The turning point in Out is the moment when Yayoi kills her husband, Kenji and the other women are drawn into her criminal activity by helping their friend to dispose of the body. Breu argues that, “Kirino suggests that the criminal acts undertaken by the women are both enabled by, and a response to, the material conditions in which they work.”. Yoshie and Masako are the two women who dismember the body and it is repeatedly likened to working in the factory, “Now that it had become a job, Yoshie was once again in charge, as if she were directing operations from her place at the head of the assembly line” (98-9). In fact the rationality of the processes which the women learn in the factory help them as Masako “found that concentrating on the process helped to deaden her jangling nerves” (100) and by dismembering the body, they are helping Yayoi to get away with killing her dead beat husband.

Masako goes one step further and uses corporate rhetoric to convince Yoshie to help her, “She made a proposal […] would you do it If money was involved.”, to which Yoshie replies, “It’s more businesslike that way” (97). This connects to later on in the plot when Jumonji offers Masako a “business proposition” (333), dismembering bodies for money, therefore giving the women financial freedom and therefore allowing them to progress. However, as noted by Julia Ingalls, “ Out of necessity, […]  they need to adapt to the changeable rubric of the corporate mindset. They are loyal to no one [….] Their fundamental motivation is to win”. For example, when faced with dismembering the body of Kuniko, one of the women to which they were once loyal to in the factory, those who “help[ed] each other out” (8), Masako and Yoshie do so citing money as their reason for doing so.

Therefore, Masako has gained economic freedom through dismembering bodies, but is still caught in a cycle in which all of human life, even death, is thought of as a monetary calculation or as Ingalls puts it, “by attempting to subvert the agenda they are now part of it”. As a result, the novel is a narrative of anti-progress and antifreedom because their form of “resistance [or freedom] is figured by and within” (Brown, 3) a neoliberal system.

Breu, Christopher. “Work and Death in the Global City: Natsuo Kirino’s Out as Neoliberal Noir” Globalisation and the State in Contemporary Crime Fiction. Ed. Pepper, Andrew, and David Schmid. Palgrave, 2016.

Ingalls, Julia. “Corporate Noir, or This Job is Killing Me”. The Los Angeles Review of Books. August 30th 2014. Web.

8 thoughts on “Is it possible to get Out? Neoliberalism and the problem of freedom in Natsuo Kirino’s “Out””