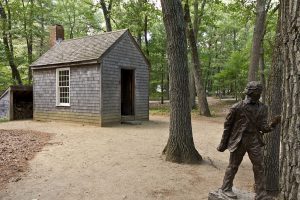 In his chronology of the themes of nature and rurality in American literature, Buell points out how it was D.H. Lawrence who first popularized the image of American writing as a “deviant pursuit by a psychohistorical explanation of the American (male) writer as an escapee from civilisation” (1). This escape from civilisation is characterised by a life in the wilderness, ideally free from the ties of society and with a unity with nature. Buell’s parenthetical gender distinction is significant. The quintessential ‘American frontiersman’ or ‘American Adam’ is found in many works of American literature and indeed in contemporary art today, for example the character of Don Draper in Mad Men (Ryan 1). But what about the ‘American Eve’?  What was the frontier experience and the significance of the ‘American Pastoral’ for the female?

An important aspect of the American Adam’s escape from civilisation is his (usually westward-bound) journey toward the ‘wilderness’. In Thoreau’s case, this escape to the wilderness involves an attempt to “live free and uncommitted” within nature (61). This ‘free and uncommitted life’ also involves a lack of commitment to human relationships resulting in a degree of solitude. For Thoreau, he cannot be lonely as he is “a part of nature” (100). This wilderness is in contradistinction with the village life; he states that he chose the plot for his home because of how far it was from the village (59).

These two distinctive worlds are present also in Housekeeping. Once Sylvie becomes the girl’s only guardian, the three live apart from society, which is embodied in the village of Fingerbone.  However, I would argue that the level to which Thoreau and the characters in Housekeeping are ‘uncommitted’ to what Ruth dubs the “other world” differs at certain points throughout the texts (Robinson 123).

As Buell notes, long before Thoreau, male narratives of “self-reliant cabin dwelling isolators” are common, whereas “the commonest counterpart narrative of women’s experience” is the story of the “female hermit”. This archetype is usually required to live apart from society due to a scandalous affair that left her pregnant with a child that often died in infancy.  To an extent, the character of Sylvie is this ‘female hermit’ that Buell describes, having moved back to her hometown after a marriage to a mysterious Mr. Fisher which the reader is granted limited information about.  He goes on to point out that “In adolescence, female protagonists become socialized away from nature, while the male continues to enjoy freer mobility and the option of questing and conquest within nature” (15). Thoreau, in Walden, is this quintessential self-reliant figure who seeks solitude in order to live more ‘deliberately’ (66). But the character of Sylvie cannot be. Throughout the course of the novel, Sylvie is increasingly judged as strange (not least by Lucille) and even dangerous due to the fact that she has not been ‘socialised away from nature’. In fact, she lives comfortably within it. Like the cabin in Walden, her home is overthrown by the elements, with wind, vegetation and flood-water making their way indoors.

Despite his advocacy for solitude, Thoreau himself notes that he is “no hermit” (105). Throughout his time in the woods he has various visitors; from the Canadian wood-chopper, to the children he appreciated for their enthusiasm and innocence. He even admits to finding the gossip he hears in the village entertaining, although he does not remain there for long. He delves in and out of the ‘other world’ of civilisation when he desires, whereas Sylvie remains insular and isolated.  I would argue that while Thoreau looks toward the civilised world at certain points, the women in Housekeeping try many times to escape it, but cannot. Buell notes that “the wilderness in American writing serves as a liminal site for male self-fulfillment in recoil from adult responsibility associated with female-dominated culture” (1). For me, however, it is Sylvie that most avidly wishes to recoil from this adult responsibility, as she stands in stark contrast to the perceived ideal womanhood exemplified in the notion of ‘good housekeeping’. Like Thoreau, she desires to live within nature, getting lost among trees, sleeping on park benches and refusing to attach ownership to objects (I’m thinking of the mildly amusing scene in which she steals the rowing boat from a stranger). However, she is not perceived as a great thinker, or an admirable ‘frontierswoman’. This is no social experiment for her. She is the subject of persecution and fear to the people of the ‘other world’, personified by the Sheriff and Lucille’s teacher (whom the girl eventually chooses to live with).

As Sarah D. Hartshorne articulates, the ‘American Adam’ is also present in Housekeeping, albeit briefly, in the form of the Ruth and Lucille’s grandfather (51). However, he is sent right down to the bottom of Fingerbone’s Lake, making clear that this is a story distinctly about the female experience; the experience of the ‘American Eve’ left behind. The ‘American Eve’ who lives within nature, in the case of Sylvie, completely submerges herself (eventually) into the wilderness. In the penultimate chapter of Walden, Thoreau states the date of his departure from the woods; his wilderness. The frontiersman here decides to return to the life of civilisation while the females in Housekeeping take desperate measures to remain separate from the ‘other world’ to which they had already lost Lucille. They burn down their house in a final attempt to live the stripped life Thoreau advocates and continue to drift, entering finally into darkness (a trope that maintains strong links with nature and pastoral imagery throughout the book). For me, the character of Sylvie embodies Thoreau’s philosophy more wholly than he does himself in some ways, choosing complete separation from society (‘civilisation’) while doing so in the face of the unique attitudes toward women at the time.

Firstly, I must confess that upon first reading Behdad’s and Williams’ scathing criticism of Azar Nafisi’s Iranian memoir, I sprung to Nafisi’s defence, eager to prove the article’s neo-orientalist accusations to be exaggerated and ill-founded. While I still believe there are contentious points, and I do not wish to digress into Nafisi’s alleged ‘complicity’ with U.S. neoconservative agencies, I now concede that Reading Lolita in Tehran is no apolitical recount of history: unwittingly or not, it is shrouded in Western ideology and fuelled by Islamophobic assumptions.

Reading Lolita in Tehran is laden with contradictions, which Rowe acknowledges makes Nafisi ‘a more complex figure’ than a mere mouthpiece for neoconservative agendas (254). At times, the narrator collapses false binaries, ridiculing the notion that ‘there were Western and Islamic versions of democracy and human rights’ (261), before again conflating Islam with an authoritarian system of oppression.

Previously, however, democracy is aligned exclusively with American values, as Nafisi regurgitates American mythic rhetoric: ‘here is the first lesson in democracy: all individuals, no matter how contemptible, have a right to life, liberty and the pursuit of happiness’ (42). Nafisi’s reverence towards her U.S. haven hides the reality that Western democracy is itself an ideology.

Žižek argues against the assumption that ‘the only alternative to ‘fundamentalism’ is the political system of liberal parliamentary democracy’ (3). While totalitarian regulation ‘effectively breeds rebellion; the only way to secure social servitude is through freedom of thought’ (Žižek 3).

This paradox is apparent throughout Nafisi’s memoir, as she demonstrates how transgressive acts against the Islamic Republic empower an Iranian subject, yet fails to recognise how democratic ‘freedom’ may remove the critical agency of an American subject.

In Part I, Nafisi delights in defiance, as everyday acts ‘acquired the complexity of a dangerous secret mission’ (56), and later suggests that she actually benefitted from being forced underground (176). In Part IV, Nafisi paints those resisting the regime in a heroic light, aligning their strength with an acceptance and desire for the ‘freedoms’ of democracy:

‘Disillusioned with the Islamic Revolution and confronted by the ideological void that followed the collapse of the Soviet Union, they had nowhere to turn but to the Western democracies they had once so vehemently opposed’ (276).

Nafisi’s adoption of an omniscient tone here displays the ‘journalistic truth’ that Behdad and Williams argue is a crucial trope of neo-orientalist texts (289), while also heralding the inevitable triumph of democracy.

Eventually, Nafisi betrays some awareness that she has idealised the West, showing concern that she has provided her daughters with an ‘uncritical, glowing picture of that other world’ (281). This influence extends to her female students, who she states ‘look at the West too uncritically’ (312). Yet in both instances, Nafisi’s accountability is displaced, as both the professor and her ‘magician’ (externalised ego?) locate the root of this idealism in the State’s extreme radicalism: ‘thanks to the Islamic Republic’ (312).

Beneath this glossy image of the West lies an occasional acknowledgement of America’s tainted history. For example, through her analysis of Fitzgerald’s Nick, Nafisi uncovers the ‘tales of the pioneers’ that colonised America with their dream ‘already tainted with the violence that had gone into making it real’ (143).

Yet despite this brief flirtation with concrete history, the narrative remains oblivious to what Donald Pease describes as America’s longstanding ‘structures of disavowal’ and ‘imperial state exceptionalisms’ (19, 25), through which the global power uses its imagined moral superiority to legitimise involvement overseas.

Politics of the Veil

This attitude of superiority is most apparent in the treatment of the veil – undeniably burdened by Nafisi’s political agenda to promote Western secularism. The novel claims it is not the physical hijab, but the mandatory  nature of veiling that constitutes female oppression. In Part III, Nafisi attempts to ‘humanise’ Tehran, buckling under the strain of the continuing war with Iraq, through using the veil as a metaphor:

‘To me, the city had suddenly gained a new pathos, as if, under the attacks and the desertions, it had shed its vulgar veil to reveal a decent, humane face’ (207).

This application of loaded emotions to the veiled and unveiled female face shatters the illusion that ‘freedom of choice’ is the novel’s central concern (152). Here, Nafisi overtly constructs an Islamophobic binary of harsh, inhumane ugliness, aligned with traditional Islam, and compassionate empathy and openness, associated with ‘modern’ Western secularism. 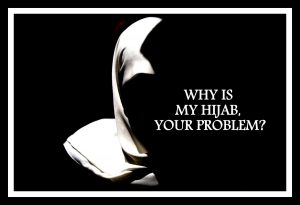 Also revealing is the memoir’s deployment of liberal individualism to justify the free choice of women to wear the veil. Before the revolution, Mahshid wore the veil as a ‘testament to her faith’ yet this is described as ‘meaningless’ once it became mandatory (13).

‘During the Shah’s time, it was different. I felt I was in the minority and I had to guard my faith against all odds. Now that my religion is in power, I feel more helpless than ever before, and more alienated’ (327).

This characterisation presents Mahshid’s faith as egocentric and the veil as a visual statement of difference, rather than a sign of modesty and devotion to God. Nafisi’s understanding of ‘freedom’ is consequently exposed as flawed, constructed purely from American ideology. This supports Behdad’s and Williams’ analysis that ‘the veil has come to serve as a crucial site for constructing and reaffirming a hierarchical and “civilizing” relationship between the West and Muslim societies’ (294).

Reading Lolita in Tehran is therefore testament to the dangers of liberal individualism and the power of the Western rhetoric of ‘freedom’ to limit and even prevent critical thought. Behind Nafisi’s triumphant advocacy – another symptom of American Exceptionalism – of women’s rights and the promotion of democracy, she has unwittingly (or not) replaced one ideology with another.

My initial resistance to Behdad’s and Williams’ criticism is perhaps evidence that I too almost fell victim to the alluring liberal egotism that assumes Western democracy to be the saving grace, and only viable option, for totalitarian – and specifically Islamic – nation states.